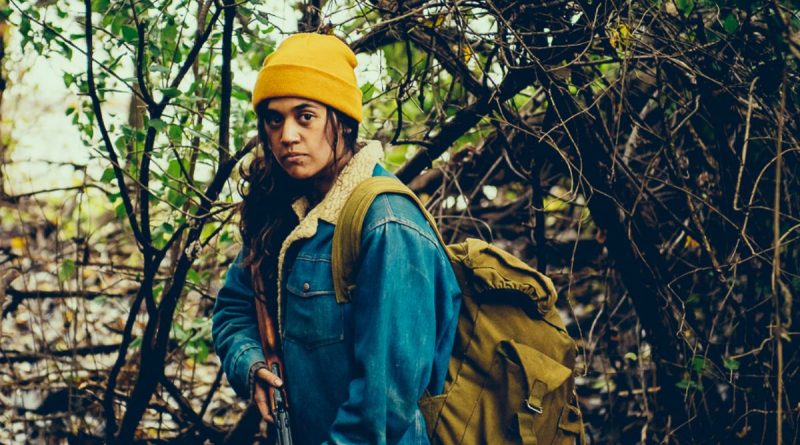 The lead character in the evocative rural drama, the oddly pro-choice, pro-life Once Upon A River, is just 15 and on the precipice of womanhood.

At the onset she appears to be lost, seeking a sense of belonging and purpose. Oppressive feelings of abandonment, financial instability, bigotry and a sense of loss plague teenage Margo Crane (Kenadi DelaCerna).

Quickly, we learn that she is short-shrifted in the family department. Her mother is no longer with her father, she skedaddled from their rural Michigan community with a lover and left a trail of dust. Margo is sullen, she wants her father to answer questions about her mother, but he deftly avoids that subject. To complicate the situation, Margo’s mom is a white woman, while her dad is Native American and not entirely accepted by her mom’s relatives who remain in the tight-knit community.

Margo’s father, Bernard (Tatanka Means), teaches her the traditional native ways of revering and connecting to the river, surviving off the land by fishing and hunting. He teaches her marksmanship. In fact, she’s adept at all, and is actually a hell of a shot. But, he does not teach her about the ways of unsaintly men. This coupled with her burgeoning sexuality and good looks, as well as the preponderance of male cousins and one horny Uncle Cal (Coburn Goss), leads to, voila!, an actual rape disguised as an inappropriate sexual encounter with her uncle — which is discovered by the entire blended and extended family.

Margo’s ostracized by her mother’s clan as the film’s narrative serves a gut punch that sets Margo on a course of navigating bad choices and worse environments. This inexperienced young woman is left to her fend for herself in the world. All she has is her wits

Director Haroula Rose does an admirable job of lensing the natural sepia-tone soaked backdrop, admirably interpreting the source material written by Bonnie Jo Campbell in 2011. Depicting the muted palette of 70’s rural Michigan where once pristine rivers were now sullied by industry, the Stark river still provides a metaphorical lifeline of sorts for Margo. It is the abandonment by her mother, Luanne (Lindsay Pulsipher), that keeps Margo at “sixes and sevens.” She’s growing up too fast. Without giving too much away, the narrative takes a sort of Shakespearean twist, and Margo’s rape revenge backfires, and she must take off on the river.

Margo’s detective work on the whys and wheres of mama Luanne consumes her. In a series of chance encounters in this Heart of Darkness-like journey to find her Luanne’s whereabouts, we watch her make alliances. Some are decent men like Fishbone (Kenn E. Head) and Smoke (John Ashton), the latter an older man failing with emphysema who believes in her and befriends her. And one is a Native American guy named Will (Ajuawak Kapashesit), on a journey himself and charged up with a chip on his shoulder — but a good heart nonetheless — who inadvertently changes the course of Margo’s life.

If anything, this story is a textbook example of the disastrous effects a missing (self-serving and borderline cruel) parent can have on an impressionable young woman who does not understand how to read men’s intentions or safeguard her own hormone-triggered curiosity and interests. All matters are made worse when Margo tracks down mama now living in her new fiance’s fancy home. “Roger” has no idea Margo exists. And he never will.

The fact that Margo is of partial Native American heritage is a distraction from the moral of this story. Margo is drop-dead gorgeous, an on-the-verge of adulthood child who is completely uneducated about the unspoken seduction play between men and women. Her lack of guile and complete naivety are catnip to predators, despite her ability to lock and load a weapon like Annie Oakley, her iconic hero. The “Indian” part of her was just low hanging fruit fueling the insults to hurl her from angry white kin who were lashing out.

In the end, enigmatic Margo was poorly supported and cared for by those who should have had her back all along. But she survives. There is a point where our internal critic asks, why are we watching this film? For Once Upon A River, it is to witness the miracle of kindness, and the randomness of human decency which can make or break someone’s spirit that is the underpinning of this story. The message is that all children need guidance and a watchful eye as they learn the ways of life so they can take eventually take educated chances and bet on themselves.