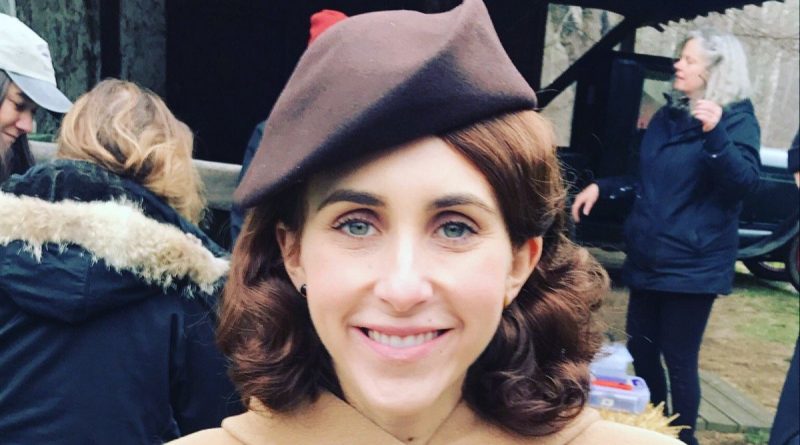 Sarah Megan Thomas is a filmmaker dedicated to telling women’s stories, especially in cinema genres where they’ve been left out of the canon. Thomas wrote, produced and stars in her latest film, A Call To Spy, a truth-based narrative about the courageous women who served in the Special Operations Executive (SOE), a secret British intelligence organization established during World War II by Sir Winston Churchill to embed spies in occupied France. The film focuses on Virginia Hall (played by Thomas) and two colleagues who gathered and relayed intelligence that lead to the defeat of Germany. Their story is important and fascinating. So are Thomas’ comments about the female perspective in cinema, how it differs and how we can get more of it on the screen.

Sandie Angulo Chen: This is my first time doing this Sarah, you’ll have to excuse me if you start hearing weird things in my house.

SAC: It’s so lovely to speak to you. During my research, I discovered that you graduated from Williams with a theater degree?

SAC: And normally I don’t mention colleges, but I thought as a fellow mom that you would appreciate knowing that I just dropped off my oldest son in Williamstown last month for his first year at Williams.

SAC: He was so excited to hear that I was interviewing a filmmaker who had gone to the school, because we had just talked about The Last Dance, which was also directed and produced by an Eph.

SMT: It’s an amazing school, and the alumni network is amazing, so he’s in good hands!

SAC: So your previous films also focus on women: women athletes, women in finance, and now women spies in World War II. What drew you to this particular story?

SMT: Yes. So, I kind of always start with the genre that I think is a commercial genre that people enjoy to watch but maybe hasn’t had that female lens in the way it could. Sports film, first female-driven Wall Street movie, and then spy film. I knew I wanted to tell a spy film. I love James Bond, I love Charlotte Gray, but at the core, those films tend to be romances, which is great, but I wanted to tell more nitty gritty indie film about what the work was like to be these female spies day in and day out. So I came upon these three women in Churchill’s secret army who were incredibly brave, won every award you could possibly imagine for bravery, and I believe changed the course of the war, and said “Let’s make a movie about them.”

SAC: You know when we were screening the movie at home, and my husband only watched because I told him it was a spy film, usually he’s not interested in screening films with me, he made two observations: One, that it was the first spy film he could remember that didn’t think of women primarily honey pots.

SMT: I love your husband!

SAC: And two, that if a man had written and directed the movie it would have centered on the Linus Roache character, Buckmaster. And so I was just curious what your thoughts were about a male audience member’s perspective.

SMT: I absolutely love that feedback, and I think he’s accurate in that feedback. I’ve been really happy that so many men are responding positively to the movie, because they see the history that maybe they didn’t know and are interested in watching it. But it’s true, we need more women producers, writers, directors to tell those stories. I like to say that I like the film Boyhood, but I could never make that movie, because I didn’t experience what it was like growing up as a boy. So the more female filmmakers we can have, the more diverse stories we can share with the world.

SAC: I think it’s curious that you brought that up, because looking at the statistics, it’s clear that last year in the top 100 grossing movies, women made up not quite 11, 10.7% of the directors, less than 20% of the writers, and less than 25% of the producers. How can we continue to elevate the work and the voices of women in film to get those percentages to represent the population?

SMT: I think it’s jut about making the work. I think one of the things that’s not talked about enough is that we need more female producers. Because the female producers can green light the female writers and directors. So it starts at the very beginning. But I also think “Be the change you want to see.” Make the films, hire women, and get the work out there.

SAC: Lastly, I know we have to wrap up, but what do you hope audiences will take away form the film?

SMT: First and foremost, I always hope with all my films that they just entertain audiences. But my favorite movies, I’d say you go out to dinner, but I don’t know if people are doing that any more, but you have a glass of wine in your house or a coffee, and they really affect you deeply the next day. And you talk about them, and you talk about the issues and how they relate to you. This is a film about quote-unquote ordinary women who became extraordinary heroes, and I hope at the end of the day it inspires audiences to know that individuals can and do make a difference.

SAC: Thank you so much. I think it’s a message that’s incredibly needed right at this moment.

EDITOR’S NOTE: You can see the video of this interview on AWFJ’s YouTube Channel.