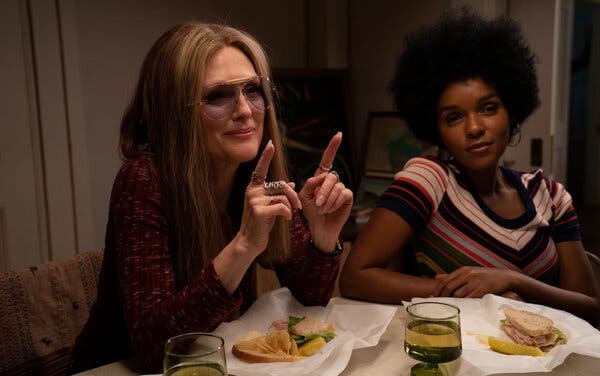 Even if you’ve traveled through much of Gloria Steinem’s life already — whether by her book My Life on the Road; the play Gloria: A Life written by Emily Mann and directed by Diane Paulus; or the recent Hulu series Mrs. America —Julie Taymor’s inventive, sometimes fantastical, movie The Glorias is a worthwhile trip. Written by Taymor and playwright Sarah Ruhl, much of the material is familiar but no less eye-opening as Taymor follows the feminist trailblazer at different stages of her life, when she is played by four different actresses.

The film follows the arc of Steinem’s life starting with childhood (she’s played by Ryan Kiera Armstrong), the daughter of a mother (Enid Graham) who gave up a journalism career and became delusional and depressed and a Willie Loman-esque father (Timothy Hutton). By adolescence (when she’s played by Lulu Wilson), in Toledo, Ohio, Gloria is taking care of her mother and dreaming of being a dancer — we get Taymor’s musical interlude in a barbershop as Gloria and a friend tap across the linoleum floor to Count Basie.

Taylor inserts scenes from childhood throughout the movie as a commentary on how her early experiences shaped the older Gloria. All four Glorias interact with one another on a bus, a metaphor for Steinem’s journey and constant traveling, that provides obvious but still welcome insights into her personality and mindset. After she graduates from Smith College (now played by Alicia Vikander), she travels through India on a fellowship, seeking out and listening to the stories of violence and persecution of the most ignored and oppressed women.

The scenes of Steinem battling her way through the sexist jungle of the New York publishing world are richly detailed, even if we’ve seen it depicted before, since it’s through her experiences in the toxic workplace that Steinem’s consciousness is raised and she connects to the burgeoning feminist movement. Like Gloria: A Life, Taymor’s film highlights Steinem’s earliest and lifelong mentors and colleagues, particularly African American activists Dorothy Pitman Hughes (Janelle Monae) and the fierce and fearless Flo Kennedy (a scene-stealing Lorraine Toussaint). There’s labor leader Dolores Huerta (Monica Sanchez) and native American activist and Cherokee chief Wilma Mankiller (Kimberly Guerrero) and, of course, the irrepressible and politically savvy Bella Abzug (Bette Midler). Steinem leans on and learns from all of them and always sees herself as part of a never ending circle.

As the older Steinem, Julianne Moore is pitch perfect in recreating Steinem’s speech, mannerisms and sly wit; no surprise, since the gifted Moore brought sharp humor and empathy to her memorable portrayal of Sarah Palin in Game Change.

Taymor shows how Steinem steadfastly resisted fame and celebrity, to no avail, as the media insisted on making her (white, attractive, educated) the face of feminism. She refused a Newsweek cover, insisting that the story focus instead on the movement — a futile request. The film pushes right up to the present with its timely inclusion of Steinem’s stirring presence at the 2017 Women’s March on Washington: she’s still the organizer; still part of a movement. The Glorias is best when Steinem is interacting with other women — creating Ms. magazine in 1972 or listening to minority women’s demands at the Houston women’s convention in 1977 just as she’d done in India —when she’s constantly in motion, always looking ahead.