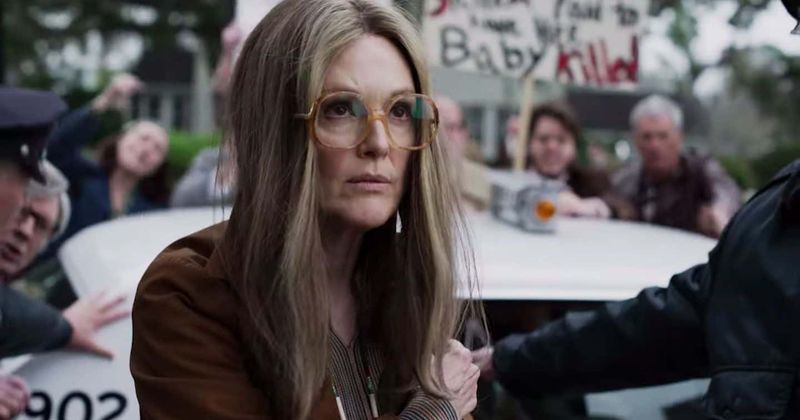 The good news about The Glorias is that Julie Taymor tries to avoid biopic clichés as she employs four actresses at different ages to tell the story of feminist icon Gloria Steinem’s life. But while indulging in her usual visual panache on screen, the director is almost too ambitious in trying to bring this notable legend to life.

Along the way, all four Glorias in are portrayed together while riding on a bus whose destination will be eventually revealed. Ryan Kiera Armstrong plays Steinem as a young girl but is upstaged early on by her eccentric and transient father played by Timothy Hutton, a guy who calls himself “Steinemite,” who always has a scheme in his back pocket. Lulu Wilson takes on the early teen years, whose lone memorable moment is an impromptu tap dance number with a new friend. She is burdened by her mother who suffers from depression but who in the past did some writing that might have influenced her daughter’s destiny as a journalist.

Eventually, Alicia Vikander takes on Gloria as a young woman who earns a fellowship to travel to India where she is exposed to the demeaning treatment of females in a caste system. Her best scenes come when she infamously went undercover as a Playboy bunny and exposes what the cleavage-bearing, cotton-tailed ladies had to put up with. Julianne Moore eventually takes over at around age 40 as she becomes a trail-blazer for women’s rights and eventually launches Ms. Magazine.

If this all sounds rather choppy, it is, complete with some odd detours into special effects, with Gloria becoming a Wicked Witch spinning in a tornado at one point. But given that two Oscar-winning actresses are sharing the role, they try their best to present a somewhat flawed but courageous fighter for women and bravely tackling such topics as abortion rights and the sexist treatment of females in the work place. Also making an impression are pro-ERA fighters like Bette Midler as Bella Azbug and especially Lorraine Toussaint as Flo Kennedy, who provides much needed fiery rhetoric and a whole lot of personality on screen.

Alas, the streaming series Mrs. America has already provided a more-on-point portrayal of Steinem with Rose Byrne in the role earlier this year. But given that women’s rights to control their bodies are being endangered right now, it isn’t a bad thing to have dueling reminders that the fight that Steinem and her fellow women libbers started is far from over.