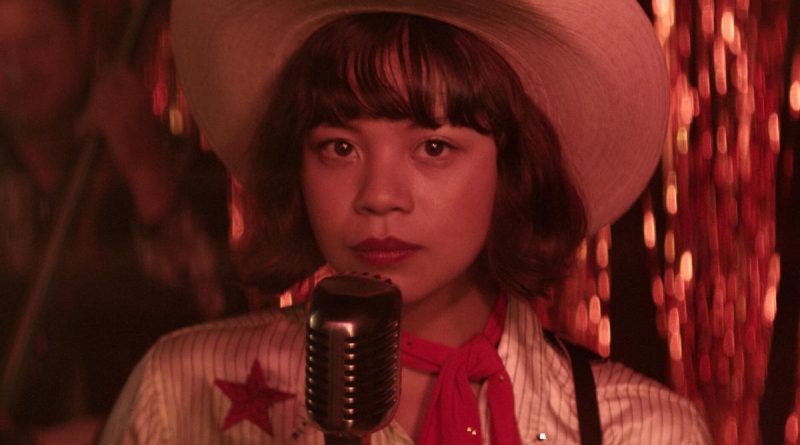 For the most part, co-writer and director Diane Paragas’ Yellow Rose pulls off an engaging coming-of-age story under-scored with real-time political undercurrents in the form of how immigrants are treated in the xenophobic era of Trump-ism. If that sounds like a downer, it isn’t, mostly thanks to the casting of Eva Noblezada as Rose Garcia, a charismatic charmer with Tony-nominated cred as an undocumented Filipino teen in Texas who yearns to be a country singing star.

When we first meet Rose, she is living in a motel where her worry-wart mother works as a maid. We watch her earnestly practice guitar and scribble lyrics in a notebook for a tune called Square Peg. When she starts to sing, it is clear she doesn’t even realize the full extent of her abilities. Clearly, we will get to see this flower bloom during the summer before her senior year.

But just like Dorothy landing in Oz, Rose gets whisked to the country-music-capital of Austin for the first time thanks to Elliott (Liam Booth), a young lad who works in a local music store. She tells her mom they are heading to church – and in a way they are, as make their way to the old-timey Broken Spoke dance club. Once there, real-life country star Dale Watson – think a rough-around-the-edges Kenny Rogers with a heart of gold and a drinking problem– could be her Scarecrow, Tin Man and not-so-Cowardly Lion as he takes an instant shine to her.

But after a night on the town, Rose arrives back home just in time to see her mother being taken away by ICE agents. Turns out she lied about her status, while her daughter thought they were OK because her late father had legal residency.

We also meet a Glenda substitute in bar owner Jolene (Libby Villari, who dispenses wisdom and warmth). As much as Rose wants to be in the bar amongst her newfound friends and supporters, we the moviegoers would rather be there, too. But instead, she heads to her estranged aunt Gail (Lea Salonga of singing Disney princess fame) and bonds with her wee girl cousin. But instead of finding a safe haven, Rose is forced to leave after her uncle decides to kick her out. Meanwhile, her mother is dehumanized as simply a number while at one of those Mylar-blanket-filled facilities and not as a human being as her fate plays out.

Of course, we know we will have the satisfaction of witnessing Rose’s big break on stage and trusty Dale will be right by her side. Alas, Priscilla’s melodramatic circumstances and her daughter’s dream don’t always mesh well. But you can’t deny that in a time when compassion for others can be in short supply, Yellow Rose offers a semi-sweet bouquet of uplifting human emotions.