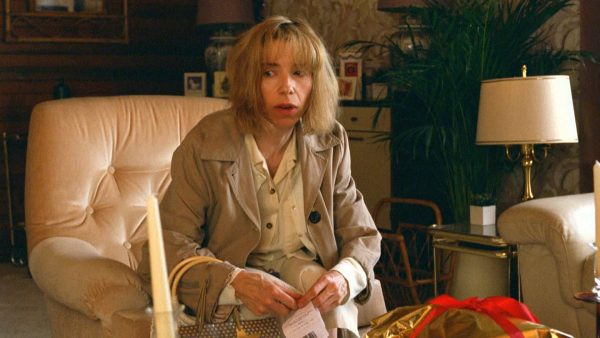 Sally Hawkins didn’t win an Oscar for The Shape of Water, losing to Three Billboards Outside Ebbing, Missouri’s Frances McDormand. The previous time she was nominated, for best supporting actress for Blue Jasmine, Lupita Nyong’o emerged victorious for 12 Years a Slave instead. But the British actress doesn’t need a shiny statuette to confirm that she’s one of the finest and most compelling talents currently gracing our screens. And, as demonstrated in Maudie and now Eternal Beauty as well, she’s one of the most quietly, touchingly expressive performers that audiences presently have the pleasure of watching — especially when it comes to characters who aren’t being afforded a voice, a path or their own sense of agency by the world around them.

In Eternal Beauty, Hawkins steps into the comfortable shoes and oversized sweaters favored by Jane, a paranoid schizophrenic who quips that “it means I think you’re out to kill me, as opposed to schizophrenic, where I’d be out to kill you”. From her doctors to her overbearing mother (Penelope Wilton), virtually everyone in her life is obsessed with her medication, and that she does whatever else she’s told to reclaim the route to supposed normality. But the pills make Jane feel hazy — and, as the film depicts subtly in the contrast between scenes where she’s medicated and scenes where she isn’t, they sap the color out of her world. She isn’t chasing a rainbow (“what if there’s no such thing as happiness, only moments of not being depressed?” she asks, in one of the movie’s particularly astute lines of dialogue), but she’s not willing to succumb to a dreary and routine existence either.

As written and directed by actor-turned-filmmaker Craig Roberts — who, in 2010’s Submarine and 2011’s Jane Eyre, played Hawkins’ son — Eternal Beauty follows a narrative noticeably slight in plot developments, but rich in observation, everyday detail and emotional authenticity. Jane repeatedly earns the dismay of her mother, who might be faking a terminal illness, but isn’t feigning her deep-seated indignation. She’s frequently ignored by her gold-digging younger sister Nicola (Billie Piper), except when the latter wants to ape her illness to claim government benefits or needs a place to stay. From her married older sibling Alice (Alice Lowe), she receives genuine kindness and understanding, all while Jane observes that Alice’s wedded life is hardly a picture of bliss. And, with pork pie hat-wearing fellow psychiatric patient Mike (David Thewlis), she finds an awkward romance that’s boosted by his constant flattery, as well as his assertion that she should sing in his band.

As Jane navigates these relationships, the film also frequently flashes back to her younger years — when, with Saint Maud and The Personal History of David Copperfield’s Morfydd Clark in the role, she was jilted at the altar, possibly sparking her battles with her mental health. The contrast between the beaming bride-to-be and Jane’s fragile, jittery older guise is stark, and helps give weight to a movie that’s largely a sensitive character study. With delicacy as well as determination, Roberts doesn’t shy away from the younger Jane’s hospitalization, the electric shock treatment she receives, and how active cruelty, obvious indifference and a one-size-fits-all medical system have all shaped her life since. But neither his script nor his often pastel-hued feature wallows, either. When Eternal Beauty peers at mirrors and multi-paneled glass, it acknowledges and embraces Jane’s fractured perspective. When Roberts employs in-camera effects with a Michel Gondry-esque air, too, it has the same subjective effect.

Hawkins is the type of actor that a filmmaker can build a whole feature around. And, as Mike Leigh did with Happy-Go-Lucky, which won her a Golden Globe, that’s firmly the case here. She isn’t just reliably excellent — unlike another performer might’ve, she plays a physically demanding part while never making audiences feel as if they’re overtly witnessing the work she’s putting in. She’s also genuine and compassionate in her portrayal; Lowe’s wonderfully understated Alice may be the movie’s main source of empathy towards its protagonist, but both Hawkins and Thewlis approach their characters with warmth and care. Jane and Mike each have their eccentricities, stemming from their personalities, primarily; however neither is merely a bundle of tics and quirks. Indeed, there’s a softness and inner radiance to Hawkins’ performance as Jane, specifically, that’s as tender as her work in Paddington and Paddington 2.

That said, there is a quirkiness to Eternal Beauty’s tone and style. Sometimes the film is a dark comedy, at other points it’s an earnest drama and, in occasional sequences, it offers up an almost-surreal, fantasy-driven trip through Jane’s head. But accepting that life doesn’t simply and obediently adhere to one type or course is a big part of its perceptive message, and its intentionally veering mood assists considerably in that regard. Aesthetically, there’s a greater sense of coherence to Roberts’ choices — the use of color; the camera angles; the nods to Wes Anderson, the aforementioned Gondry and Submarine’s Richard Aoyade — but each of Eternal Beauty’s frames stresses the same idea, too. As the film conveys and Hawkins’ exceptional work as Jane epitomizes, expecting order in this disorderly world is futile, but carving out the space and finding the solace you can proves the exact opposite.