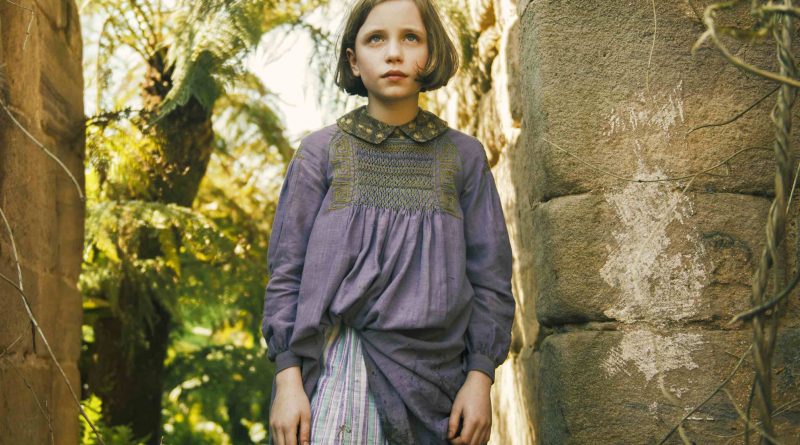 Appealing to youngsters who have been trapped in isolation for many months because of Covid-19, the theme of the wondrous fable is surprisingly timely.

This version begins in 1947 India during a cholera epidemic on the eve of its Partition from Pakistan, during which 10 year-old Mary Lennox (Dixie Egerickx) is orphaned. She’s sent to England to live with her reclusive, widowed Uncle, Lord Archibald Craven (Colin Firth), at cavernous Misselthwaite Manor on the Yorkshire Moors.

Willful Mary is placed in the care of Craven’s stern housekeeper (Julie Walters) who warns her to keep to her own rooms and not to ‘explore’ her gloomy Gothic environs – which, of course, she immediately does, making fascinating ‘discoveries’ along the way.

Following a robin through the rolling mists, Mary finds a disheveled, stray dog and makes friends with Dickon (Amir Wilson), the young brother of the housemaid (Isis Davis).

When Mary climbs over a tall fence surrounding abandoned ruins, she’s suddenly in a secluded garden, a veritable paradise filled with lush, tropical flowers and foliage, along with a muddy stream whose remedial waters seem to heal the dog’s paw which was caught in a trap.

Plus, there are ghostly flashbacks to happier times when Mary’s mother and Colin’s mother – devoted sisters – languished there.

FYI: While there have been many British TV/stage interpretations, perhaps the most poignant screen version was in 1949, starring Margaret O’Brien; Agnieska Holland remade it in 1993.

On the Granger Movie Gauge of 1 to 10, The Secret Garden is a fanciful 6, blurring the elusive line between a child’s imagination and reality. Available on Google Play, Amazon Prime and other streaming outlets.