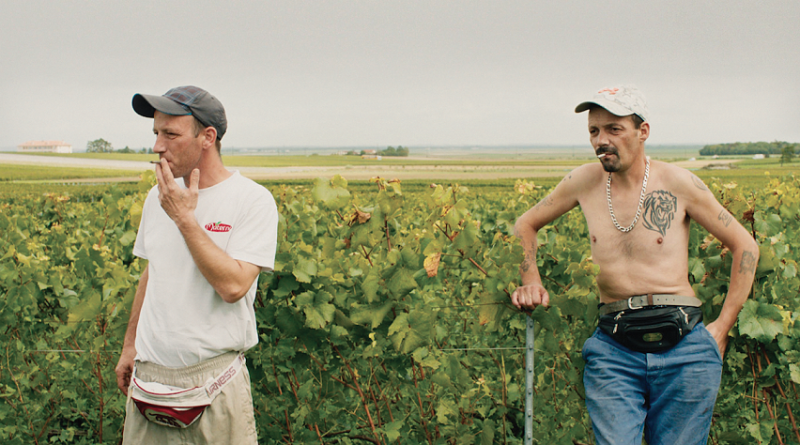 In vino veritas — in wine, there is truth — has been a common Latin proverb for at least a millennium. (Just ask Pliny the Elder.)

But Wine Crush expands the proverb to in vino verite, thanks to its cinema verite exploration of harvest season in France’s Champagne region.

American director Laura Naylor’s documentary, which debuted at last year’s Doc NYC festival under its French title, Vas-y Coupe! (Go On, Cut!) focuses on the family-run Jacques Selosse vineyard — and the family of seasonal workers who help bring in the grapes every year.

They’re a raucous, roughhouse crew, some of them returning to work the Selosse fields for decades.

“I think of you all as my second family,” the grizzled Michel Waret tells them, recalling how he used to dandle one of their now-grown children on his knee.

Most of these workers would rather guzzle beer while they’re busy cutting grapes from the neatly furrowed vines. (After all, they could hardly afford the Champagne those grapes will make.)

Despite their labors, however, they manage to maintain a sardonically cheerful spirit.

“Thank you. boss!” they sing. (Of course, they’re singing in French, so it’s really “Merci, patron!”) “What a pleasure it is to work for you! We’re as happy as fools!”

Not that Anselme, who oversees the vineyard, or his son Guillaume, the heir apparent, remain carefree during this pivotal period.

The grapes aren’t as plentiful as usual. Some of them are hardly worthy of the Selosse name. “Working your ass off all year round and funding a lot of rotten grapes … it’s upsetting,” Anselme admits.

Meanwhile, the ladies of the kitchen diligently plan, prepare and serve hearty meals that, to American eyes, would qualify as four-star restaurant fare.

And so it goes, as Naylor carefully compares and contrasts workaday scenes, whether it’s the laborers squabbling over their pay or Guillaume exploring his emerging winemaking identity. (“It’s even more expressive than your father’s,” one wine-tasting guest comments.)

For oenophiles, Wine Crush will provide a painstakingly detailed deep dive into the winemaking process.

For those of us whose knowledge of Champagne consists of popping the cork, pouring the bubbly and savoring each sip, this documentary’s primary focus — on the process even more than the people — proves somewhat frustrating.