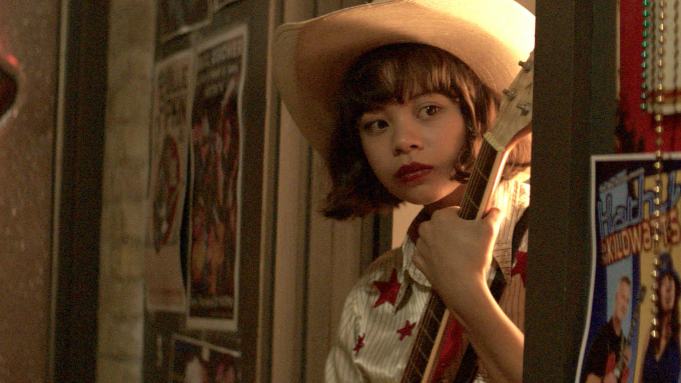 Both a timely drama about the harsh nature of U.S. immigration policy and its impact on families, and a poignant coming-of-age story, Diane Paragas’ semi-autobiographical first feature Yellow Rose centers on a talented Filipina teenager living in Texas whose love of country music is one of the few things she has left after her world abruptly crumbles around her. 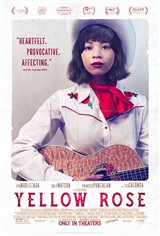 As the movie opens, Rose (talented Broadway star Eva Noblezada) wants nothing more than to put a little distance between herself and her loving but strict mother, Priscilla (Princess Punzalan), so she wheedles her mom into letting her go see live music in Austin with her friend Elliot (Liam Booth). She has a great time, but when Elliot brings her home, it’s to the horrifying sight of ICE agents dragging her handcuffed, undocumented mother away. And, just like that, fleeing home with only a backpack and her guitar, a new chapter in Rose’s life begins.

Priscilla’s foresight helps direct Rose to her Auntie Gail (the excellent Lea Salonga), but the girl’s sanctuary there is short-lived, since Gail’s white husband isn’t thrilled to have her under his roof. While her mother negotiates life in a dehumanizing detention facility, Rose finds another safe place to stay — but the specter of ICE follows her there, too. Eventually she must decide whether her future lies in Texas or with her mom, a heartbreaking choice that no teenager should have to make.

Amid all the obstacles that Rose faces, one of the things that keeps her going is her songwriting and love of Patsy Cline-style country music. She finds an unlikely mentor in Dale Watson (playing himself), who believes in her talent and urges her to follow it. But this is no Star Is Born showbiz story; instead what Paragas gives viewers is a tender, empathetic look at the realities of being undocumented in the United States — Betsy Bozdech

MaryAnn Johanson What an absolutely lovely, thoroughly heartbreaking film! Rose’s journey, and the trauma she has to cope with at such a tender age, is a total upending of “American dream” fetishization cinema often engages in… and to do so in the context of country music is a stroke of genius, with its themes of freedom and self-determination. It underlines the fundamental cruelty of modern America, which imagines itself a torchbearer for bravery and rugged risk-taking, with a pop culture that carries that message around the world, yet which is pulling up the welcome mat for far too many people drawn by that. The smashing of paradigms we see here is exactly what we can expect when previously marginalized voices finally get to tell their own stories.

Sandie Angulo Chen: Filipina American director Diane Paragas’ indie drama Yellow Rose is a beautiful exploration of the bond between mothers and daughters, the plight of undocumented immigrants, and the transcendent power of music. Fans of musical theater will need no other reason to see it than the fact that there are two acclaimed Broadway stars in it: Tony Award nominee Eva Noblezada of the latest Miss Saigon revival as the titular Rose and pioneering Tony Award winner Lea Salonga as her aunt Gail. Noblezada turns in a fabulous performance and the scenes when she sings are so memorable that audiences will immediately want to check out the soundtrack. Country singer Dale Watson, playing himself, is also excellent as Rose’s mentor and friend, and Liam Booth is crush-worthy as Rose’s friend-turned-love interest Elliot. But even more poignant than the music is the fierce connection between Rose and her mother, who’s detained by ICE. Even though Rose is left alone, she knows her mother’s love is stronger than any border.

Susan Wloszczyna: Diane Paragas’ Yellow Rose pulls off an engaging coming-of-age story under-scored with real-time political undercurrents in the form of how immigrants are treated in the xenophobic era of Trump-ism. If that sounds like a downer, it isn’t, mostly thanks to the casting of Eva Noblezada as Rose Garcia, a charismatic charmer with Tony-nominated cred as an undocumented Filipino teen in Texas who yearns to be a country singing star. Read full review.

Leslie Combemale Eva Noblezada has such real warmth and spark as Rose Garcia in Director/screenwriter Diane Paragas’s indie Yellow Rose that audiences will empathize with her challenges and root for every little victory she has. Rose struggles undergoing the experience of an at-risk undocumented immigrant, very quickly on her own when her mother gets arrested and deported. Noblezada allows us into Rose’s fears and fragility, and whether it’s her reticence to perform her own songs at the local Austin bar, her anger with her mom, or the emotional claustrophobia of never feeling safe or wanted, we are with her. The actor is one to watch, and bound for great things.

Loren King There is so much to like and admire about Diane Paragas’ debut feature, Yellow Rose it’s hard to know where to begin. The film beautifully captures the struggles of a young woman to find her voice and a sense of belonging in an often hostile world as it celebrates the joy of making music and its power to provide hope. Read full review.

Kathia Woods Immigration is not just a Latino issue; it’s a global problem. So it was refreshing to see that the center of Yellow Rose is a young Filipina girl named Rose, portrayed amazingly by newcomer Eva Noblezada with the voice of an angel. We see firsthand how a caring parent’s decision for a better life hurts a child’s future. Immigration is a timely conversation in our current political climate. While this film has political overtones, it also tackles assimilation. Rosa’s Aunt Gail marries an American and loses her sense of loyalty to her family. The other gem in this film is the music. Country music is an American art form, and it’s getting the loving treatment it deserves in this film. Dale Watson portrays himself, further giving legitimacy to the genre. This film works because Eva Noblezada gives a heartfelt performance that leaves the viewer wanting more.

Jennifer Merin Yellow Rose, Diane Paragas’ first narrative feature, is a coming of age tale about a bright Filipina teenager, Rose (Eva Noblezada), who has an undeniable talent as as country and western singer/songwriter. She’s a good student with a bright future — but all of that ends abruptly when her undocumented mother, who works as a maid in the motel where they live, is picked up and detained by ICE. Rose is suddenly on the run with a few personal belongings and her precious guitar, facing her mother’s immanent deportation. She manages to support herself by doing menial jobs and relying on the kindness of strangers many of whom quickly become her good friends. Yet, we see the anguish caused to her and her mother by the ICE-enforced separation. Despite a string of daunting adversities, Rose persists and prevails. Delivered with a lot of heart and soul, Yellow Rose is a message of empowerment to women of all ages.

Cate Marquis Rose (Eva Noblezada) is like any rural Texas country girl, riding her bike, wearing jeans and loving country music. She even plays guitar and writes her own songs. But this high schooler doesn’t go home to an old-fashioned farm house, because she lives in a roadside motel, where her undocumented immigrant Filipina mother (Princess Punzalan) works as a maid. One day when Rose is out, ICE agents come for her mother, which turns Rose’s world upside down. Country music fans always seem to say it is the stories they love, which makes director Diane Paragas’ debut feature, a coming-of age tale with an immigrant twist, the perfect match. With Eva Noblezada’s beautiful singing voice and winning songs by country music’s Dale Watson, uplifting Yellow Rose is a country ballad on screen sure to please country fans

Language: English, with some Tagalog