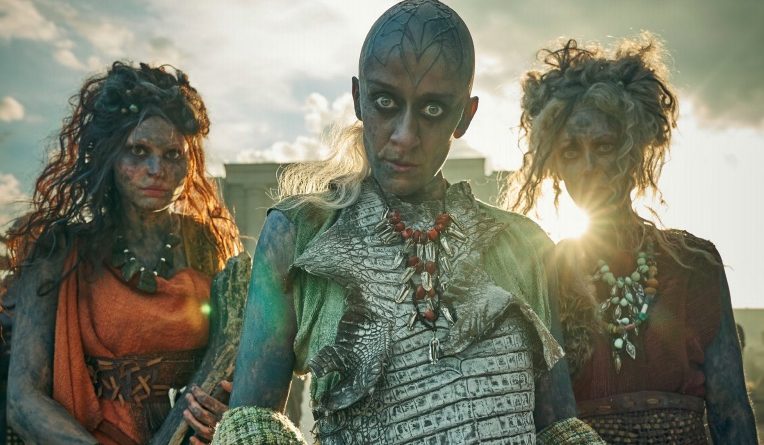 In 55 BC, Julius Caesar invaded Britannia to exploit the island’s legendary tin deposits. But – after facing the wrath of barbaric Druids – he soon departed, noting: “Druids conduct public and private sacrifices and interpret all matters of religion…sacrificing fellow Gauls by burning them alive inside giant wicker cages.”

The marching Roman invaders with “SPQR” on their banners are led by Gen. Aulus Plautius (David Morrissey), who proclaims “Behold, gods of Britannia! I am Rome! And where I walk is Rome!”

Amid the blood feuds, treacherous decapitations and secret alliances, there’s 16 year-old Cait (Eleanor Worthington-Cox), introduced in an interrupted Celtic girlhood-to-womanhood ritual on the Summer Solstice, along with a wandering Druid outcast Divis (Nikolaj Lie Kaas) who exerts strange mind-control over those he encounters.

Writers Jez Butterworth, Tom Butterworth and James Richardson use the Druids’ murky, nature-worshipping, pagan history as a launching point for this fictional fantasy.

The language the Druids speak is ancient Welsh, which is still used in Wales. And the song during the introductory credits is “Hurdy Gurdy Man,” released in 1968 by singer/songwriter Donovan Leitch.

On the Granger Gauge of 1 to 10, “Britannia” is a blood-soaked, sword ‘n’ sorcery 7 – available on Amazon Prime.