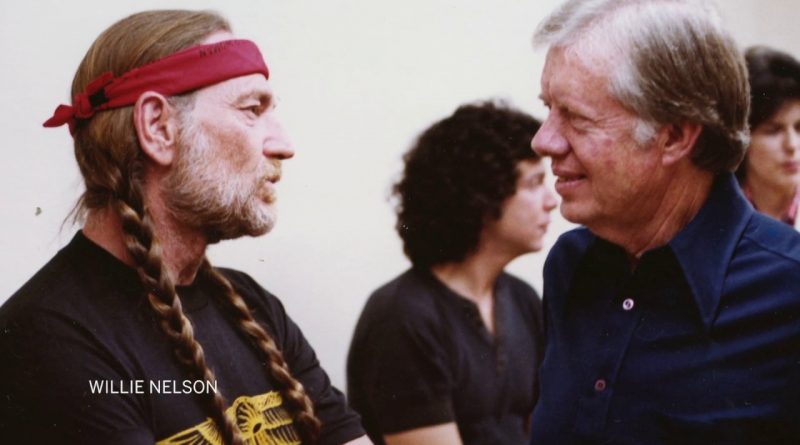 Titanic biographies have been penned about Presidents of the United States. But this delightful documentary dances down an unusual path toward a biography of Jimmy Carter. His knowledge and love of music boosted his candidacy and election to become the 39th President of the United States.

Most people think of Carter as a Southern peanut farmer, a home-builder for the unhoused, or a Sunday School teacher. They might allow that he knows a few old hymns, but they do not think of him as a rebellious rock ‘n’ roller or a jazz aficionado. They might not pair him with Willie Nelson or Rosalyn Cash, Bob Dylan or the Allman Brothers.

Director Mary Wharton, who skillfully enfolds the political with the musical, makes a solid case that Carter was the first politician to buddy up to the music of the counterculture, the other “long-haired” music. When Carter, although governor of Georgia, needed to up his recognition, he called on the Allman Brothers to help raise funds for his run for the presidency. They did and he won.

In the Carters’ hometown of Plains, Ga., Blacks comprised 80% of the population. Carter’s liberal household, his father’s fingers commanding the dials of the family’s battery-powered radio, embraced that culture, including its music. Carter carried his views on racial harmony to the White House where Mahalia Jackson sang “Down by the Riverside” — that archival film forms a highlight of the documentary. Aretha Franklin sang at his inauguration.

Wharton asked Chip Carter if his father played an instrument: “The stereo,” he responds and relates a time when, though the family had little money, Jimmy Carter spent $600 on the finest stereo he could buy. Thus, his children knew the lyrics to Bob Dylan’s music — much to Dylan’s surprise.

More interviews with Rosanne Cash and Bono (they declaim Carter’s poems), Nelson, Niles Rodgers, Madeline Albright, and Rolling Stones’ Jann Wenner, among many others, add to this warm and wonderful film. Jimmy Carter, all smiles and wisdom, stars throughout.