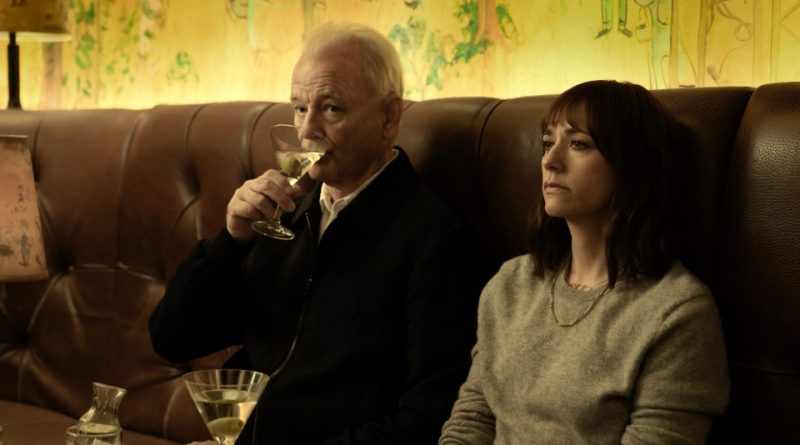 On the Rocks feels a bit like what you’d get if Woody Allen and Wes Anderson made a movie together — only with a lot more feminine energy, empathy, and understanding. Sofia Coppola’s dramedy tackles modern marriage, motherhood, career uncertainty, and parent/adult child relationships with a light touch and strong performances from a talented cast. 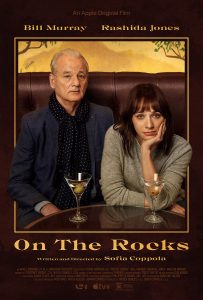 Rashida Jones stars as Laura, a thirtysomething Manhattan mom who’s gotten so caught up in the many needs and busy schedules of her two little girls that she’s started to lose both her sense of self and her connection to her husband, Dean (Marlon Wayans). She wants to write but can’t find the right words to put on the screen. She wants to be romanced, but Dean gives her a glorified blender for her birthday. It doesn’t help that Dean is working and traveling all the time trying to make his start-up company succeed — or that some of his co-workers are attractive, available young women. Laura can’t stop herself from feeling suspicious, especially when her father — notorious philanderer Felix (Bill Murray) — drops in and encourages her to believe that Dean is probably being unfaithful.

Laura and Felix embark on a series of covert observation missions throughout Manhattan and further afield, all the while discussing the impact of infidelity on their own family (Felix cheated on Laura’s mom with an assistant when his kids were young) and the dynamics of intimacy in a marriage. Murray plays Felix with his particular brand of lovable-scoundrel appeal, and Jones matches him skillfully, making it clear that Felix both charms and exasperates his daughter.

Less wistful than Lost in Translation — the Coppola film to which it’s most likely to be compared to — On the Rocks is frequently funny (especially whenever Jenny Slate’s oblivious, self-absorbed fellow preschool mom is on screen) but also earnest about the challenges its characters are grappling with. Keeping the spark alive, both in relationships with others and in your relationship with yourself, isn’t easy, but it’s often the key to happiness. — Betsy Bozdech

Nikki Baughan: Sophia Coppola reunites with her Lost In Translation star Bill Murray for this light but insightful study of the fight to maintain your identity when you become a parent. Rashida Jones is superb as the nearly-40-something who has lost her creative mojo after becoming a mother, and Murray is a joy as the ageing playboy father who struggles to take anything seriously. A charming confection. Read full review.

Sandie Angulo Chen: Sofia Coppola’s intimate dramedy On the Rocks features standout performances from Rashida Jones and Bill Murray as a daughter and father who team up to investigate whether the daughter’s husband (Marlon Wayans) is having a stereotypical affair with his assistant. While the “is he or isn’t he” angle is the framing story, the more compelling aspects of the film are about the parent and adult child relationship. It’s clear they have their own psychological baggage to unpack, beginning with the father’s own history of infidelity. Murray’s charm almost makes up for his character’s claim that men aren’t meant to be monogamous and that adultery boils down to a biological imperative. Jenny Slate pops up as recurring comic relief as an oversharing mother who can’t stop obsessing about her own love life at preschool drop off and pick up, and Wayans is believably cagey as a workaholic husband who isn’t paying enough attention to his wife. Coppola hasn’t quite made 2020’s answer to Marriage Story, but it’s an entertaining and well performed film about complicated relationships.

Nell Minow: This is by far the warmest and most engaging film we have seen from Sofia Coppola, whose films have always made great use of spaces and silences. The light touch throughout evokes the best of Woody Allen, with bittersweet family connections,a lush score, a love letter to Manhattan, and a reminder that “the heart is a resilient little muscle.”

Susan Wloszczyna: Once again, Sofia Coppola pairs Bill Murray with an younger actress, this time in the form of Rashida Jones, not as a love interest — as was the case with Scarlett Johansson — but as his daughter. The main similarity between them is the fact that both characters suspect their spouse might be cheating on them. Read full review.

Leslie Combemale As much as I’m a proponent of female filmmakers, I’ve never much been one for the movies of Sofia Coppola. With On the Rocks, that has changed. I loved the film, and believe it’s one of the best vehicles in Bill Murray’s career. Sometimes his shtick brings attention to itself to such a degree that we become removed from the story or whatever is happening onscreen. Not so in On the Rocks. On the contrary, he gets so far out of his own way, his portrayal brings us all the more into the story. He is an unqualified marvel.

Jennifer Merin On The Rocks, Sofia Coppola’s latest feature, stars Rashida Jones, Bill Murray and Marlon Wayans in an enjoyable family dramedy about a young and insecure woman who follows her philandering father’s advice about how to save what she perceives to be her failing marriage. The seek out and spy on plot takes some enjoyably quirky surprise turns, and the performances are terrific. The daughter-father relationship is relatable and the entertaining film offers a welcome escape from today’s heavy news.

Liz Whittemore Sofia Coppola has given us a witty commentary on relationships through a father-daughter dynamic in On The Rocks. The casting of Rashida Jones as an accomplished author and mother with the suspicion her husband is having an affair is spot on. Jones has a way of putting an audience at ease. She has a familiarity in her presence that makes her both lovable and relatable. You are buying every word that comes out of her mouth. Paired brilliantly with the incomparable Bill Murray, you believe that this is a genuine relationship between an adult daughter and her eccentric, well-meaning father. Murray is his charming self, utilizing Coppola’s delicious dialogue to its fullest, undoubtedly adding his own personal touches at moments. Murray gets to play both an unapologetic womanizer and a redemptive father. The script is something akin to a warm embrace. You’ll laugh openly straight through the teetering on misogyny laden “dadsplaining”. It is a film about forgiveness and trust. Easily one of the most endearing films of the year, On The Rocks will hit home with viewers in one way or another.

Kathia Woods On the Rocks is Sofia Coppola’s latest film. It features Bill Murray, Rashida Jones, and Marlon Wayans. Felix is attempting to reconnect with his daughter Laura by suggesting that her husband Dean is having an affair. The suspicions are exacerbated by two demanding careers and parenting a young child. This film is not going to be everyone’s cup of tea. It has neurotic humor at the center. One tends to think about why Laura would seek advice from Felix when their relationship is a struggle. In turn, he inserts himself into her marriage as a means to reconnect while assuming his son-in-law is untrustworthy. Creating an interesting dilemma, however, anyone who’s marriage would never seek advice or speak to everyone but their spouse if trouble arises. On the Rocks is quirky fun but not based in reality. It also grossly underuses Marlon Wayans, which may be its biggest sin.

Cate Marquis Director Sophia Coppola teams again with Bill Murray for a sweet, dryly funny film about a quirky, wealthy, philanderer dad (Murray) who worries his son-in-law (Marlon Wayans) is cheating on his beloved daughter Laura (Rashida Jones. Dad is a cheater himself, and figures a it takes one to know one, and so with smooth charm draws his uncertain daughter into a number of adventures aimed at uncovering the truth. On The Rocks‘ father-daughter tale avoids full-out farce in favor of a more pleasing funnier style that is part Cary Grant caper film with a splash of vintage Woody Allen. Sure to bring a smile to anyone who has a roguish charmer for a father, it is a true return to form for Coppola, and one of her most winning films.

Title: On The Rocks

Distribution Company: A24 and Apple TV+