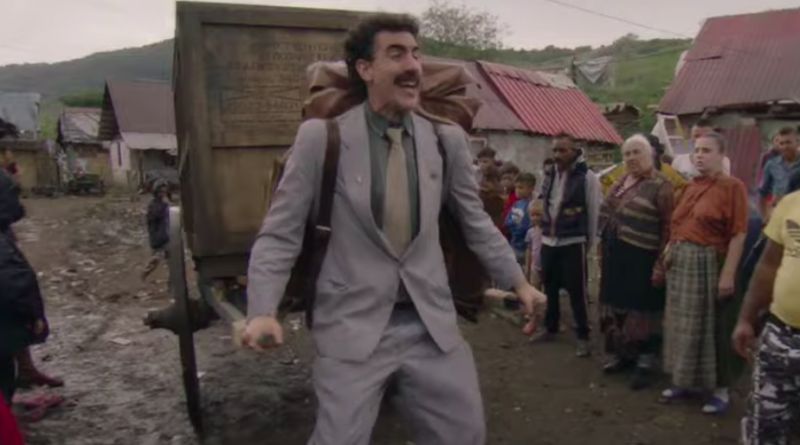 The subtitle of Sacha Baron Cohen’s second mockumentary about his hapless titular character, Borat Margaret Sagdiyev, is revealing: “Delivery of Prodigious Bribe to American Regime for Make Benefit Once Glorious Nation of Kazakhstan.” This satire, which Baron Cohen wrote with a couple dozen others, indeed involves a bribe.

The clueless journalist is being sprung from stir in his home country. He’s been incarcerated for embarrassing Kazakhstan, but now his country needs him to gain favor with President Trump, whom he calls “McDonald.” He is to present a naughty prize monkey to the Prez, but his daughter eats the monkey so becomes the bribe herself. Tutar is 15 (although played by the 24-year-old Maria Bakalova) and has a lot to learn.

Her father, however, must disguise himself as he is still recognized 14 years after the original film. He becomes a mask of his former self. He shows up in a KKK sheet at the Conservative Political Action Conference last Feb. and changes in the men’s can to a Trump fat suit and flings his daughter over his shoulder to present to Vice-president Mike Pence (“the most famous ladies’ man”). Pence is at the mic, proclaiming that the corona virus is under control.

Sacha Baron Cohen, a satirist in the classic tradition, does not raise laughter so much as he raises goosebumps by being outrageous and atrocious while straddling the truth. His satire stands on the shoulders of Jonathan Swift, the 17th-century Irishman, who knew a modest proposal when he wrote one. Baron Cohen has written another. And it bites immodestly.