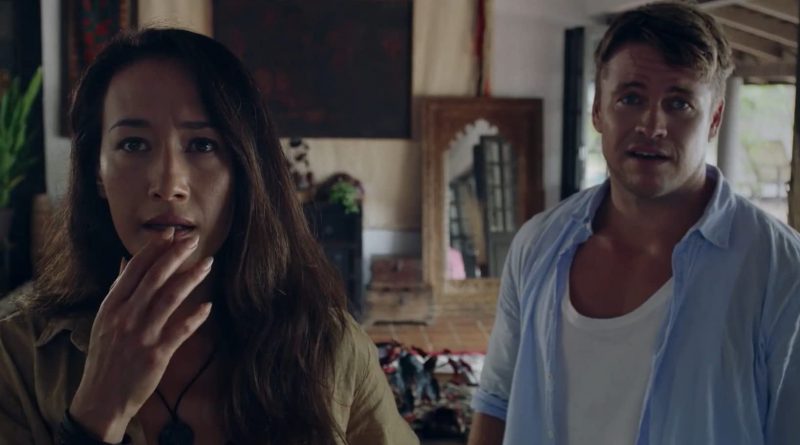 Occasionally, there’s a movie that so dumb and dull that one wonder how and why it ever got made.

Neil Oliver (Luke Hemsworth) is a travel writer who takes his wife Christine (Maggie Q) to a remote tropical island off the coast of Thailand. After experiencing the local culture and cuisine, they wake up one morning with their hotel room in shambles and no memory of the previous night.

Searching on Neil’s digital camera, Christine finds shockingly explicit footage as Neil appears to murder her by breaking her neck. And, sure enough, she has fresh bruises around her throat.

To add to their confusion, a typhoon is threatening the region and, because their passports are missing, they have to find them in order to catch the next ferry to the mainland.

“No typhoon has hit this island in 200 years,” they’re told. But the weather reports are increasingly dire.

Meanwhile, mysterious locals, many wearing grotesque masks and moaning incoherently, are preparing for an upcoming festival. They all seem fascinated by Christine as she dashes around the village, trying to figure out what’s happening.

Apparently, Christine and Neil drank a cocktail that turns out to be heady hallucinogenic brew, served by Madee (Kat Ingkarat), who may have placed a sinister tribal talisman around Christine’s neck.

Writers Arli Margolis, James Morley III and David Tish patch together a murky, improbable horror/thriller – with obvious cult allusions to The Wicker Man and Midsommer. But the action is lethargically directed by Darren Lynn Bousman, credited with three installments of the Saw franchise.

On the Granger Movie Gauge of 1 to 10, “Death of Me” is a tedious 3, available on digital platforms and VOD.