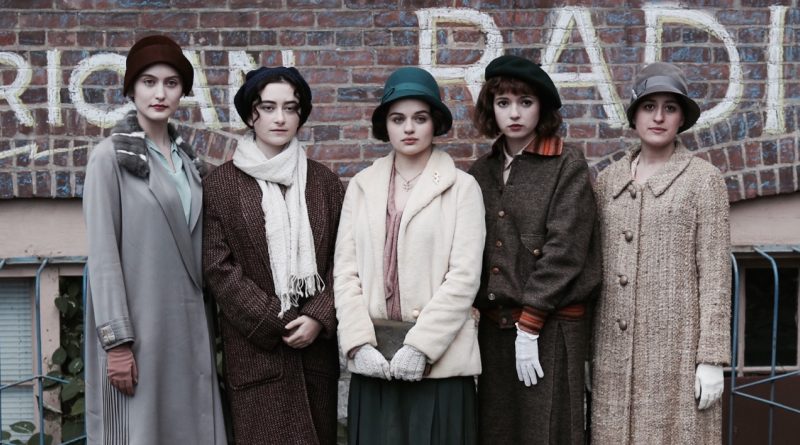 Based on true events during the late 1920s, this docudrama focuses on two teenage Cavallo sisters employed at the American Radium Factory in Orange, New Jersey, painting numbers on the popular, glow-in-the-dark watch faces, earning one-penny each.

When Josephine (Abby Quinn) develops a red, swollen jaw and loses a tooth, Bessie (Joey King) begins to suspect that perhaps their factory work conditions are contributing to her mysterious illness.

Seated at long tables – watched by Mrs. Butkiss (Carol Cadby) and supervised by Mr. Leech (Scott Shepard) – the all-female workforce is instructed to lick the tips of thin paintbrushes for greater efficiency, despite the bitter taste of the phosphorescent liquid: “Dip, lick, paint.”

Previously, their deceased older sister developed the same symptoms but the factory ‘doctor’ (Neal Huff) said she had contracted incurable syphilis. When he visits Bessie, he delivers the same diagnosis – but Bessie is a virgin and Jo knows she could not have contracted the dreaded venereal disease.

Eventually, encouraged by a local labor leader (Cara Seymour) and Black photographer (Susan Heyward), Bessie and the other afflicted workers file a lawsuit against American Radium; it’s the case that ultimately had a lasting impact on workplace health and safety in addition to the study of radioactivity.

The half-life of radium-226, the toxic isotope that was called ‘liquid sunshine’ and acclaimed as a ‘miracle cure,’ is around 1,600 years. Yet the paint continued to be used until the 1970s.

Sincerely scripted by Brittany Shaw and Ginny Mohler, who co-directed with Lydia Dean Pilcher, it’s unevenly paced, the one-dimensional characters are not as fully developed as they should be and the stilted dialogue is often awkward, which makes it less effective than Norma Rae, a far better film about workers’ rights.

On the other hand, the superb production design reflects prodigious research, reflecting the period through archival newsreel footage and period costumes.

On the Granger Movie Gauge of 1 to 10, “Radium Girls” is a sympathetic 6, chronicling a shameful chapter in U.S. labor history…it’s available video-on-demand.