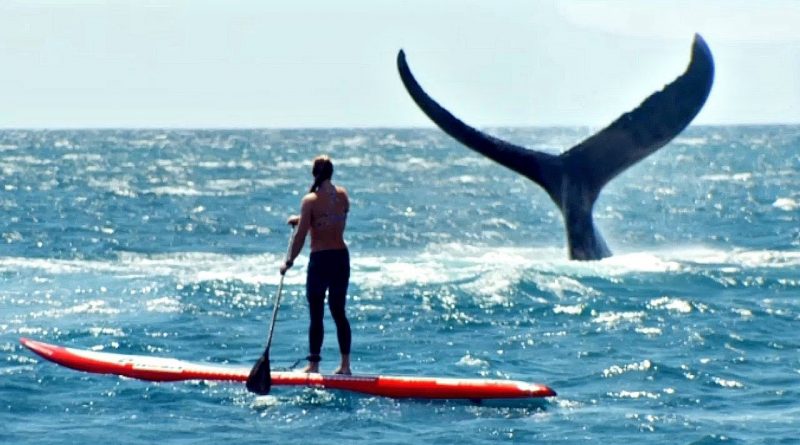 It’s said that salt water – sweat, tears or the sea – is the cure for anything. She Is The Ocean proves these are not mutually exclusive as it shines a spotlight on nine women who rely on the ocean to compete, to heal, to survive.

Director Inna Blokhina has crafted a documentary about the force of nature that takes up more than 70 percent of our planet, and the lure it holds for these women – many of them forces of nature themselves. Unfortunately, the subject matter seems too big and it quickly becomes unwieldy.

Each of the women’s stories stands alone and there’s no real connection between them other than the fact that they’re all related to the ocean in some way. Each becomes kind of its own mini-documentary, which makes for interesting segments but not compelling film viewing.

Although the stories of most of the women are inspiring – we meet surfers, a cliff diver, a shark conservationist, a stand up paddle boarding paramedic – the film itself lacks a real narrative to hold it together. It’s casually framed around Cinta Hansel, a young surfer whose goal is to master the iconic Pipeline in Oahu. This is a good idea in theory because we get to watch her grow up and work hard to achieve her dreams, empowering other girls to do the same. But it ends up being antithetical to the film’s whole “you go, girl” philosophy since most of her story is told by her father, a former pro surfer himself. He’s out of place here, and giving the movie’s narrative to a man destroys some of its credibility as an ode to female power.

The photography is gorgeous, and it’s exhilarating to join the aptly-named Ocean Ramsey as she swims with sharks and to see the view from Anna Bader’s eyes as she plunges into the water from an 80 foot cliff. The passion of these women is unquestionable.

Just like the sea, She Is The Ocean is choppy, with its own ebbs and flows. This doesn’t mean it’s not worth watching – it is – but don’t feel you have to commit to diving straight in when it’s just as satisfying to dip one toe in at a time.