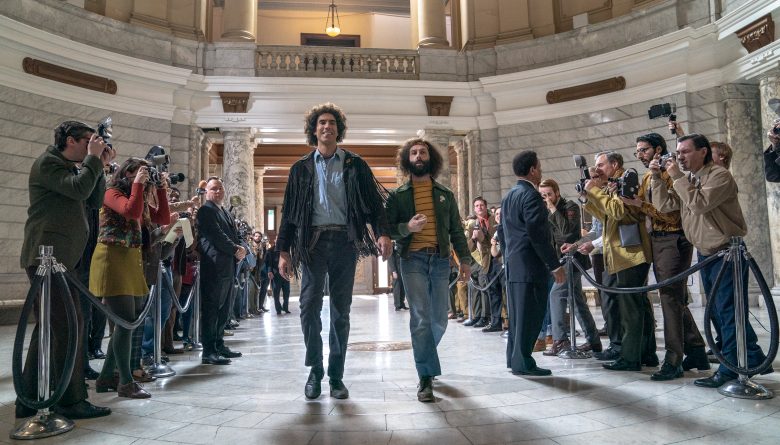 With Netflix’s The Trial of the Chicago 7, the 2021 Oscar race is officially underway. For this surprisingly timely, compelling courtroom drama, writer/director Aaron Sorkin has assembled a stunning all-star cast.

The story begins before the 1968 Democratic National Convention in Chicago when the presumptive candidate Hubert Humphrey indicates his support for America’s continued involvement in Vietnam.

Sorkin sets the stage for the seven Anti-Vietnam protestors who will subsequently be accused of conspiracy, inciting to riot and other troublemaking charges stemming from disruptions during the Convention.

There were original eight defendants but Bobby Seale (Yahya Abdul-Mateen II), a Black Panther Party leader, was so constantly reprimanded by Judge Julius Hoffman (Frank Langella) and so repeatedly found in contempt of court that he was removed from the case.

Best known for his sharp, perceptive dialogue, peppered with succinct soliloquies, writer/director Aaron Sorkin (The West Wing, The Newsroom, The Social Network) has crafted a timely, yet talky tale, utilizing flashbacks and newsreel footage. Free speech and demonstration are interpreted as lawless rioting with the government and its supporters expressing complete faith in the police.

In the production notes, Aaron Sorkin explains its relevance: “The script didn’t change to mirror the times; the times changed to mirror the script.”

Perhaps Baron-Cohen’s Abbie Hoffman puts it best: “The institutions of government are wonderful things, but right now are populated by some terrible people.”

On the Granger Movie Gauge of 1 to 10, The Trial of the Chicago 7 is an incisive 8, a showcase for the superb acting ensemble.