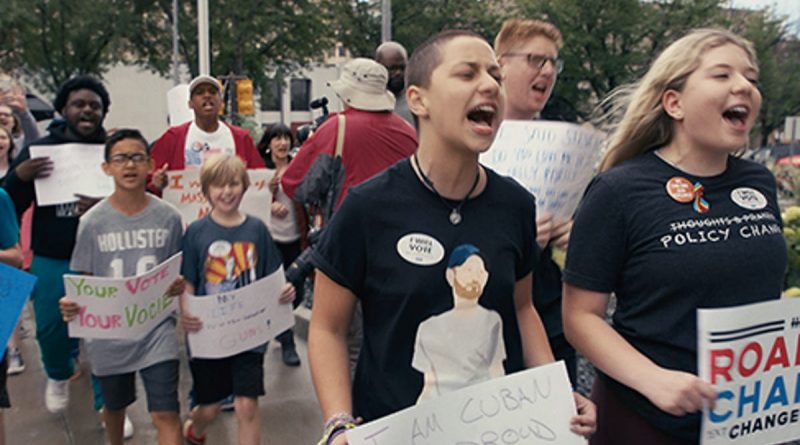 We the people face so many outrages day after day — the most notable being how our current president prefers magical thinking over taking measures to keep the country safe and sound during a raging pandemic. It is easy to forget all the constant acts of inhumanity committed in the name of political self-interest since 2017 when Trump took office.

One of the most horrifying incidents during his reign of terror occurred on Valentine’s Day in 2018 when a gunman opened fire with a semi-automatic rifle at Marjory Stoneman Douglas High School in Parkland, Florida, leaving 17 dead and 17 injured. It would be the deadliest high school shooting in U.S. history. Kim A. Snyder, whose previous school-shooting documentary, 2016’s Newtown, earned a Peabody Award is now back with Us Kids, focusing on the young survivors of the Parkland massacre and the March For Our Lives movement they started.

The most prominent figure is Samantha Fuentes, who survived after being shot in her thigh and having shrapnel embedded in her legs after witnessing how her star-swimmer classmate Nick Dworet expired before her eyes. Before her life would change forever, Sam says she was “a normal-ass kid doing normal-ass things.” But like many of her fellow students, she felt compelled to protest the ease of buying deadly rifles and called out politicians who gladly take handouts from the NRA.

Snyder allows us to experience the conflicting emotions and traumas as these teens take matters into their own hands, both by protesting in the streets but also by having each other’s backs. Several became media stars of sorts, including Emma Gonzalez and her gorgeous shaved head, whose chant “We call B.S” became a slogan, and David Hogg whose maturity and way with words at events got him labeled as “a crisis actor.” While their remarks to crowds resonate as loud as ever, too much time is spent on bus tour stops, meetings and public events. When matters get personal, Us Kids is at its best. As these young people turn a tragedy into an opportunity to better the world, it is also clear these kids are not just alright but also right.