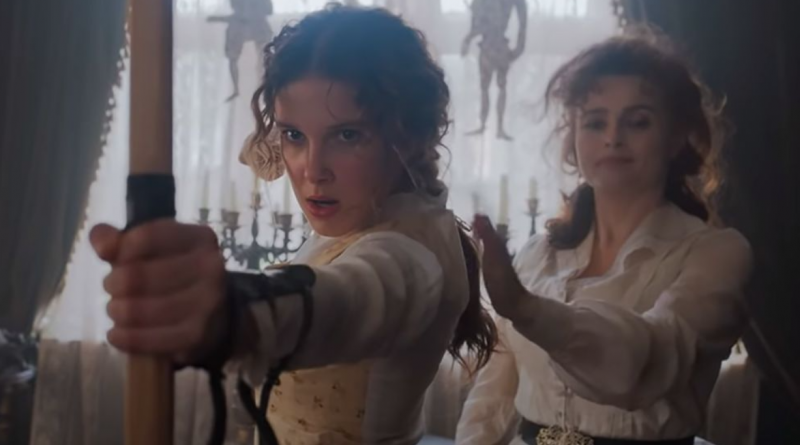 Based on the first of Nancy Springer’s series of YA novels, set in 1884, it revolves around Sherlock’s teenage sister Enola, played by plucky Millie Bobby Brow (best known as Eleven in TV’s Stranger Things), who faces the camera and addresses the audience directly.

Born when Sherlock (Henry Cavill) and Mycroft (Sam Claflin) were already grown and gone, Enola was raised by her eccentric, widowed mother, Eudoria (Helena Bonham Carter), who home-schooled her to be an independent, free-thinking woman, a rarity in in Victorian England.

Along with excelling in chemistry, cryptograms and chess, clever Enola is also adept at archery and fencing. Then on the morning of Enola’s 16th birthday, Eudoria disappears, leaving only a lovely but cryptic gift for her bewildered daughter.

Forced to return home and care for Enola, Mycroft is eager to enroll her in a ‘finishing school,’ where the prim headmistress (Fiona Shaw) is reputed to be able to turn unsophisticated girls into “acceptable wives and responsible mothers.”

“I have my own company,” cheeky Enola explains, noting that her name – spelled backwards – is “alone.” So she runs off, disguised as a boy, hoping to find her beloved mother in London.

Along the way, she meets another teenage runaway, Viscount Tewkesbury/Marquis of Basilwether (Louis Partridge), who becomes her friend as she tries to enlist reticent Sherlock in her quest.

Episodically scripted by Jack Thorne (“Harry Potter and the Cursed Child”), it’s directed by Harry Bradbeer (“Fleabag”), who deftly includes the controversial issue of Parliamentary reform and expanding voting rights to include women.

On the Granger Movie Gauge of 1 to 10, “Enola Holmes” is a delightfully subversive 7. I want sequels…