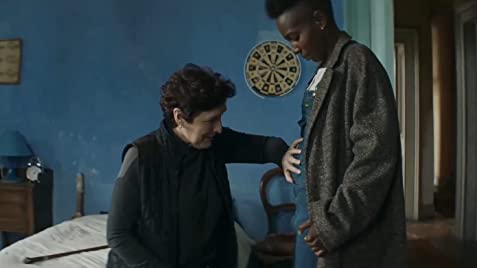 Kindred is a psychological thriller, but not exactly as advertised.

The film is about a pregnant, grieving woman trapped in the house of her malevolent in-laws; for scary material, ‘pregnant’ would have covered it.

All the horror hallmarks are here — ominous ravens, isolated locations, keening string music — but the dark heart of the story is maternal instinct.

Kindred captures all the claustrophobia, fear of the unknown and infantilization experienced by pregnant women, not to mention the ferocious, beast-like protective instinct that comes with motherhood.

The story begins with Charlotte (Tamara Lawrance) and Ben (Edward Holcroft) a young couple planning a move to Australia.

This does not sit well with Ben’s aristocratic mother, Margaret (Fiona Shaw).

The expectation, as far as Margaret is concerned, is that Ben will one day take over the massive country house that has been in the family for nine generations.

When Charlotte discovers she’s pregnant, Margaret becomes adamant that Ben and Charlotte stick around. No one is taking her first grandchild half the world away!

Charlotte, meanwhile, isn’t at all happy about being pregnant. She expresses vague fears of oppression and entrapment, but everybody else is overjoyed at the idea of a baby.

Then Ben has a terrible accident. Charlotte is taken in by Margaret and Margaret’s stepson, Thomas (Jack Lowden). They want her to rest and recover and stay with them at the country house until the baby is born.

Charlotte is in a state of shock. Regardless of what she may have wanted, her pregnancy is underway; now she’s in an isolated place with comparative strangers, being told what she can do, where she can go, who she can see. Mostly, she’s told to go to bed and rest.

And she seems to be a prisoner in her mother-in-law’s house.

Paranoia or peril? That’s the question.

Kindred is heavy on atmosphere and slightly underfed on story.

The film is a visual wonder, awash in beautiful location and detail — much of that bent just slightly to become dread-inducing. The stately family house, for example, is all formal rooms full of grand ancestor portraits, dried flower arrangements, cunning taxidermy and other homages to dead stuff.

Charlotte’s state of mind is questioned by others. She has disturbing dreams at night and strange visions during the day, and she can’t seem to think straight — she fears she’s being drugged.

But then there are whispered suggestions of mental illness in her family.

As for Margaret and her vaguely odd step-son, Thomas, are they menacing, or are they just eccentric? Is the house locked to keep Charlotte in or to keep other people out?

It’s all vaguely alarming at all times.

Charlotte tries to free herself, of course. Each time she turns to others for help, it is underlined for her that she is an outsider in all this.

More than once, she is brought back to Margaret’s stately property like a runaway slave; like a slave, she is valued for the fruits of her labor, in the most literal sense.

Kindred is a slow burn. No matter how creepy or disturbing, events never really leave the realm of the credible — the very thing that will please some viewers and disappoint others.

The film is beautiful to look at, thanks to cinematographer Carlos Catalan. It is haunting to witness — unsettling in mood and music and meaning — and an auspicious feature film debut for writer/director Joe Marcantonio.