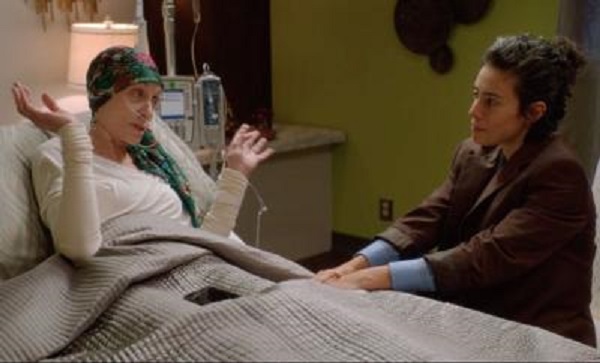 Decades of films have taught viewers that the death of a loved one alters a person’s life forever. They’re not wrong, of course. But that accurate observation is often treated as little more than motivation for the protagonist’s actions — of both the dramatic and tear-jerking kind — rather than a thoughtful examination of the complexities that accompany facing mortality. It’s refreshing, then, that Ms. White Light doesn’t just regard someone’s passing as a mere catalyst for change amongst those left behind. And, that the above statement remains true even though the movie firmly focuses on a woman whose life revolves around the loss of others. Indeed, as ruminatively penned by writer/director Paul Shoulberg (The Good Catholic), Ms. White Light understands a few basic truths about humanity that are so rarely admitted in such a frank fashion: that death is hard and messy, that most people don’t want to deal with it, and that many will opt out when confronted by the serious health woes and terminal illnesses suffered by even their nearest and dearest.

Lex (Roberta Colindrez) has no misapprehensions about the way people handle the death of others. The fact that many will and do pay to avoid the entire situation is the whole reason that she has a job. She helps the dying let go and move on in their final days, hours and minutes, generally simply by spending time with them, listening to them and talking to them. It’s a role she’s emotionally equipped to play — despite her social awkwardness, she’s at ease when she’s working — but she’s clearly deployed as a surrogate by those who hire her. Accordingly, much to her father and business partner Gary’s (John Ortiz) dismay, Lex occasionally lets her clients know just what she thinks about their dereliction of duty. That’s not a great way to drum up future word-of-mouth business in a field that depends on it; however, when it happens in Ms. White Light’s introductory scene, it signals just how serious the movie is about its topic.

Ms. White Light isn’t a grimly serious film, though. It just shines a light on a grim reality, daring to acknowledge something that we all know but usually refuse to admit. And from that starting point — from recognizing that, in your final moments or close enough, your family and friends might not be there for you after all despite all expectations to the contrary — it examines Lex’s efforts to reluctantly open herself up to the world. It’s hardly surprising that a woman who routinely witnesses others die without their children, parents and pals by their side has trouble connecting with others, with trusting them, and with sporting anything but a misanthropic attitude. Indeed, Lex is in a state of arrested development as a result, living with her dad, working with him and dressing like him as well, until a trio of strangers enter her orbit.

A strong opening and an astute exploration of a thorny area can’t disguise Ms. White Light’s standard story arc, with Lex’s life taking a turn when she meets Nora (Carson Meyer), Val (Judith Light) and Spencer (Zachary Spicer). Samurai-loving teenager Nora is days away from death and angry about it, but manages to survive to become Cordova & Cordova Mortality Solutions’ new unpaid assistant. World-weary cancer patient Val’s remaining time seems numbered, too, and she’s recruiting all the experts she can to help fill it. Lex is one of them, but so is the smugly charismatic Spencer, who claims to be able to talk to the spirit world. In another straightforward narrative inclusion, Lex is initially skeptical of all three, until she spends more time with each than she initially would’ve chosen.

From ever-reliable veterans Ortiz (Togetherness) and Light (Transparent) to the less experienced Meyer (A Million Little Pieces) and Spicer (another The Good Catholic alum), Ms. White Light is well-cast all round. But when it pushes The Deuce and Vida’s Colindrez to the fore — and Lex, obviously — it’s the best film that it can be. It’s impossible to extricate its protagonist and the actor playing her from the movie’s survey of mortality’s many complications, including for those who remain. It’s similarly impossible to imagine someone else doing the tricky role justice. Inherent in Lex’s approach to those she counsels on their deathbed, and her disdain for those who choose to remove themselves from that situation, is a willingness to accept what most people willingly, overtly ignore. In Colindrez’s piercing stare, that truth lingers. In Lex’s discomfort with pleasantries and social niceties, and in the way she happily escapes into the baggy suits she dons like a uniform, viewers also understand the toll it takes to deal with difficulties that others won’t.

Less convincing is Ms. White Light’s embrace of quirkiness: in its tone, which veers between comedy and drama; in its pronounced camera movements; and in its almost Wes Anderson-esque penchant for symmetry in some scenes. All three choices might be designed to make the movie’s subject matter more accessible — facing death is tough, and acknowledging how selfishly many react when their loved ones are doing just that really isn’t easy either — but this would’ve still proven a richly contemplative, refreshingly honest affair anyway.