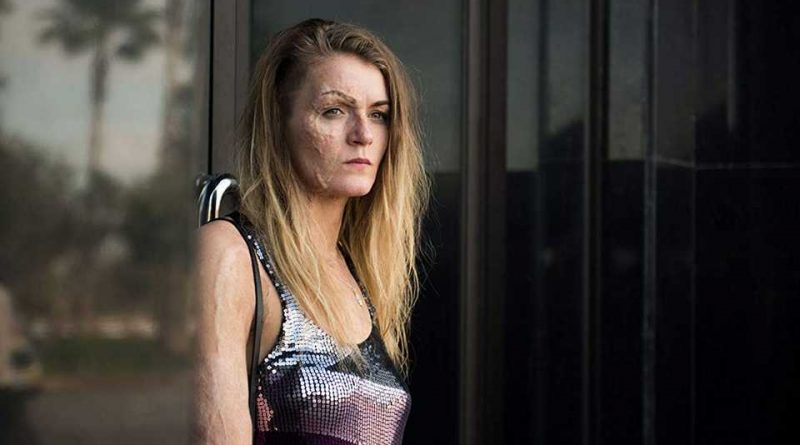 Plenty of people are uncomfortable in their own skins.

After all, we meet her scars before we ever meet her.

We’re not sure what we’re seeing, but the lyrics of the opening song offer a clue: “I am human, nothing more than human … “

Our first glimpse of the movie’s “nothing more than human” focus (played by powerful newcomer Vicky Knight) comes in the form of an unsettling window reflection.

A plastic mask protecting her shell-shocked face, Jade’s being discharged from a London hospital following extended treatment for burns on her face and upper body.

We’re not sure exactly what’s happened to her. (Yet.) But she knows all too well.

As for why it happened, Jade’s still figuring that out. But the young single mother has other concerns.

Jade’s own mother (Katherine Kelly), who fits the proverbial description “young enough to be her sister,” has been caring for Jade’s toddler daughter Rae (Eliza Brady-Girard) during Jade’s recovery. But Rae bursts into tears when she catches sight of Jade.

The club’s pulsing beats and pulsating lights may temporarily hide Jade’s disfigurement — but only remind her of what she’ll see in the mirror, and other people’s eyes, when the music stops and the lights come up.

Jade’s struggles to deal with disfigurement amplify all the other struggles she’s had before, from selfishness to anger.

But not self-pity. She’d rather take action, even if it’s the wrong action — whether engaging in online hook-ups or planning an overseas trek for cheap plastic surgery.

Instead, Polak and cinematographer Ruben Impens keep the focus on her, and her isolation among others, with almost relentless intensity. (Rare lighter moments, as when Jade finds unexpected freedom donning a floor-length niqab that hides everything but her eyes, prove especially welcome.)

Fortunately, Knight (who’s had her own real-life scars since childhood) delivers a fiercely compelling performance, giving Dirty God an intensity and insight it might otherwise lack.