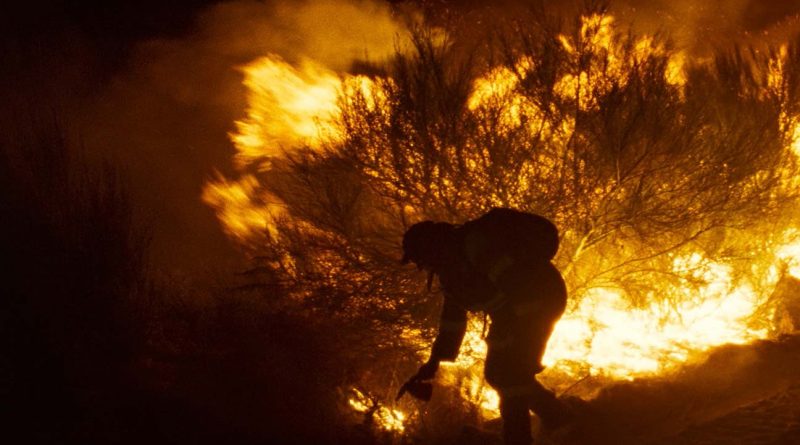 Fire Will Come follows a convicted arsonist returning to his Galicia home.

Faithful to its film title Fire Will Come, director Oliver Laxe doesn’t disappoint. And when an incredibly horrendous conflagration does arrive in Galicia, the firestorm’s horror is reminiscent of the recent devastating California and Colorado infernos. The leadup adds dreaded anticipation primarily because of its slow, understated presentation of the central character, Amador.

Amador’s unceremonious introduction finds him leaving prison after two years served for a conviction of arson. But, more terrifying, the opening shots of Fire Will Come telegraph a horror movie atmosphere through dark images and alarming sound. A massive bulldozer that looks like the monster it is flattens invasive eucalyptus trees, though it halts before a hundred-year-old relic. Amador will return on a bus to this beautiful mountainous area of Galicia with evocative opera music on the soundtrack. Through these choices, director/co-writer Laxe has crafted a work of contrasts that dominate the thin narrative.

Using both actors’ real names, Amador returns to his mother Benedicta and their three cows. Nearby, several villagers rehab a decrepit house anticipating tourists, a prospect that seems highly unlikely. At the pace of the rural life, Amador and Benedicta herd cows, a funeral occurs, a fight breaks out, a vet comes, and Amador visits a local café, all the while enduring the disdain and suspicion of others. Therein lies the emotional heart of the film’s interrogation of human psychology. Can, will others accept Amador? Is he guilty or not? With so few conversations, it’s difficult to decide, perhaps only Benedicta’s comment provides a hint when she says, “If they hurt others, it’s because they hurt too.” Surely, the actor Amador conveys this burden, perhaps ironically since his name translates as “the one who loves” and his mother’s name means “the blessed.” In their debut films, Amador and Benedicta suggest volumes with few words.

Galicia has among the highest number of wildfires, an issue that attracted Laxe’s attention. Here, Mauro Herce’s breathtaking cinematography captures both the beauty of that rural environment and the alarming power of the blaze. In Spanish with English subtitles, Fire Will Come is available through the KimStim website.