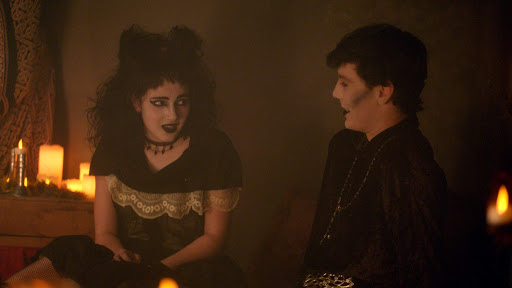 Like its 16-year-old heroine, My Summer as a Goth has some growing up to do.

Suffering from a definite identity crisis, this coming-of-age tale can’t quite decide whether it’s a summer romance, a fish-out-of-water comedy — or an earnest study of a teenager struggling with potentially life-shattering emotions.

My Summer as a Goth opens, appropriately enough, in a cemetery, where high school sophomore Joey Javitts (spirited Natalie Shershow) arranges flowers on a grave.

When a much older passer-by inquires why she’s there, Joey explains, “Dead people don’t ask you what you’re doing all the time.”

She’s really there to commune her recently deceased father — and contemplate her final day of 10th grade without him.

She’ll also be spending her upcoming summer vacation without her novelist mother (Sarah Overman), who’s off on a book tour. Not that Joey minds, considering the palpable hostility between mother and daughter.

Instead, Joey’s off to visit her flaky grandparents (Fayra Reeters, Jonas Israel) — and, while “not exactly thrilled to be hanging out with the old folks,” she reasons, “at least I won’t be here.”

Joey’s summer instantly transforms when she discovers another summer guest in the neighborhood: the endlessly intense Victor (Jack Levis). With with his glam-rock makeup and blacker-than-black attire, Victor appears perpetually ready for his Rocky Horror Picture Show close-up.

Inevitably, instantly, Joey’s smitten. And Victor seems reasonably intrigued, if only by the possibility of transforming Joey into another worshipful acolyte. Besides, it’ll be easy — Joey’s already in the mood to wear black.

The script (by director Tara Johnson-Medinger and Brandon Lee Roberts) follows a familiar pattern: girl meets Goth, girl loses Goth, girl wonders whether Goth is really the one for her. After all, Victor seems more than a tad smug — and is happy to admit it, “if by ‘smug’ you mean awesome.’ “

My Summer as a Goth enthusiastically embraces its comedy of contrasts — as when those cute Goth kids ride a carousel on the Fourth of July. And the screenwriters provide plenty of snarky, flip-lipped quips for the characters to spout.

As a result, it’s a whole lot less than the sum of its parts — some of which provide mild diversion, but not nearly enough.