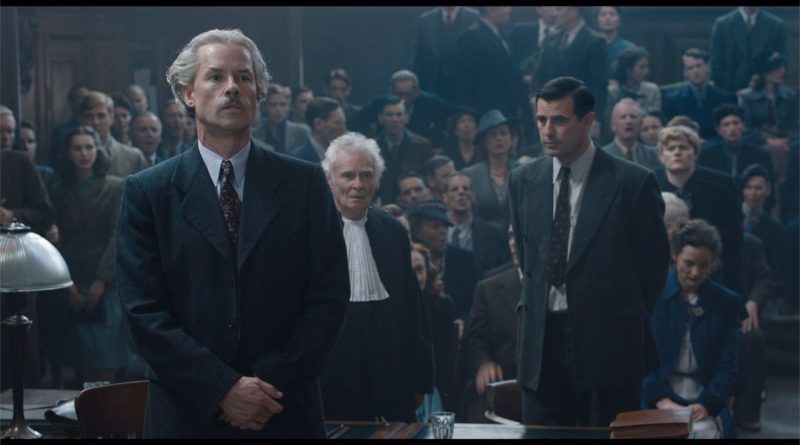 Straining credulity were it not based on fact, The Last Vermeer chronicles the twists and turns of Han van Meegeren’s fortunes. He sold the rare, iconic Vermeer painting Christ and the Woman Taken in Adultery for 1.5 million guilders to infamous Nazi Reichsmarschall Hermann Göring during WWII. The Last Vermeer begins May 29, 1945, shortly after Hitler’s Reich ends.

As the film opens in Amsterdam, Allies discover caches of paintings, many stolen from Jewish citizens, in railroad cars in an Austrian salt mine. Dutch Captain Joseph Piller, previously with the Resistance, is tasked to track down and bring to trial Nazi collaborators. He sets his sights on Han van Meegeren, living as an aristocrat, arrogant, and wanted for trial by Piller and others. Collaboration, when proven, brought a death sentence. However, as Captain Piller pursues the truth, possible forgery complicates his investigation. Director Dan Friedkin reveals unexpected details right up to the final scene.

Based on Jonathan Lopez’s 2008 book The Man Who Made Vermeers, longstanding issues emerge explicitly during van Meegeren’s 1947 trial. What makes a painting valuable? Who decides? How competent are the experts? How do individuals then and now regard the embattled post-WWII judicial process and citizens’ desire for revenge? Though dealt with in a cursory manner, all these questions remain deliberated today.

Technically, cinematographer Remi Adefarasin relies on wide and middle distance shots, allowing the drama to play out in straightforward fashion. The art direction heightens immersion in that era with browns, greys, filtered light, and, upon occasion, lighting reminiscent of Vermeer’s paintings. Carrying the film on his broad shoulders as Captain Piller, Claes Bang clashes verbally and nonverbally with a brilliant Guy Pearce as Han van Meegeren, physical and ethical contrasts. Cleverly, as Pearce pretends to paint, he actually brushed an oily mixture on a canvas, removing a chalky layer to reveal the art. Perhaps a bit too cerebral, nevertheless, The Last Vermeer probes important historical and moral issues.