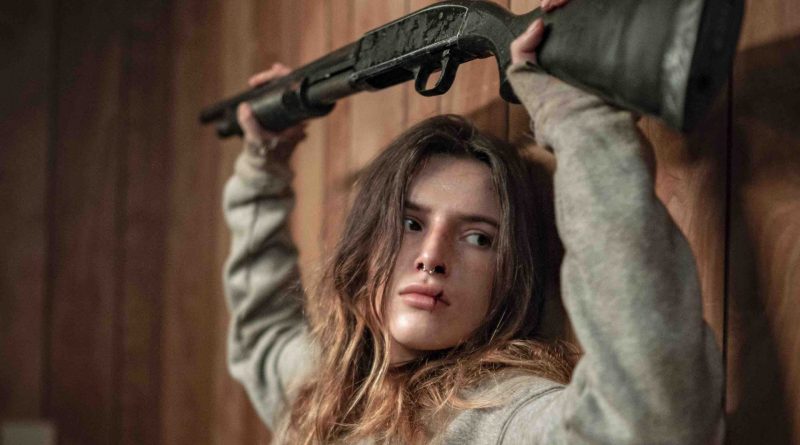 Girl is a stark and evocative horror noir hybrid that keeps you guessing until the end scene. Secrets and small towns are joined at the hip. The sting of surviving an abusive family is made sharper by poverty. Life is harder as everyone knows your business, it seems.

Dysfunctional lives in failing, awful small towns are the tableau for writer, director and actor Chad Faust who has served up for Bella Thorne’s character —known simply as “girl”—to mine. Our protagonist (Thorne) has had a hard life, and now is hell bent on revenge against her father who is initially painted as the super villain in this yarn. An event early in sets off our “girl” on a mission.

A trifecta of talent, writer/director Faust also plays a great heavy and is cast as Charmer, half of “the brothers”, the Sheriff (Mickey Rourke) being the other.

Bella’s “girl” is on a mission, but the cast of predatory and scurrilous characters that envelope the place she sets out for all have different ideas for her best laid plans. She’s fresh meat blinded by anger and hurt in a town full of dangerous men. This is as much a horror film as it is a noir thriller. The dreary town she arrives at has no name. Most of the characters have no names. We feel suspended in a strange alternate parallel world of rural misery.

Faust’s excellent cinematic effort is a stark reminder that whether it is nature, nurture or both, so many people do not have solid foundations to spring into life successfully. They’re short shrifted by circumstance, birthright and bad stock, How they make their way, if they do at all with any success, is a miracle.

Hatchet in hand, “girl” sets out to kill the man who she was told walked away from her family when she was six. Her crippled mother receives a threatening letter from him. Girl is set in motion to protect her mother and dispatch the man who left her to fend for herself. Twist is, someone beat Girl to the punch.

The script and dialogue are sparse in detail, while the visuals fill in the blanks of this universal story of revenge, regret, redemption and survival, all of these a more treacherous path for anyone who is female. The lensing of this story is blanched, with the subdued decaying tones of the oppressive woods and rundown facades of businesses and homes that had seen better days. The town is ominous, diseased and rife with danger. Cursed actually, with the low expectations of broken, incestuous and criminally inclined people, many who we come to find out are related to our “girl”.

It takes a devil to police bad seeds. Enter the Sheriff, aka one of “the brothers”, played with great relish by Mickey Rourke. In scene, he’s a force of nature without so much as uttering a full sentence. He conveys menace with just a smile. Our “girl” may be relieved of one parent, but she has taken on the toxic environment from which both her parents sprang.

This is a disturbing look at small town America gone to the dogs, left to the devices of evil men who seemingly answer to no one. A place riddled with cancerous emotions and nefarious players and their victims.

Thorne is dressed down in this role and excels in her subtle but strong take on a girl done wrong by her daddy, and for that matter, life. She’s adept at fighting back, and she is riveting in her slow boil of anger and ultimate realization of the messy family truth. Thorne plays it all perfectly with a sense of fatalistic, proactive ace hatchet throwing-filled vengeance. She proves that she is more than a Disney actor or a beautiful face. Her low key scenes that crank up in volume—played opposite Charmer —are powerfully telling and resonate truthfully to the viewer.

No more spoilers, the turn of events as Thorne tries to unspool what is actually going on make this a wonderfully tense cautionary tale. We are spared our protagonist “girl” not devolving into a simpering, victimized female character trope.

Hats off to a bruised, bloodied Thorne who can hold her own in white knuckle scenes with a seasoned actor like Rourke. Faust also shines playing the psychopathic sidekick to Rourke’s depths of depravity lawman role.

Faust’s penned and visualized mood completely envelopes us as the taut score seals the deal. We can practically taste the depressive Pacific Northwest atmosphere. He eventually gives us a glimmer of human decency which allows us a moment to breathe deeply once again.

Girl will stay with you long after the credits finish rolling.