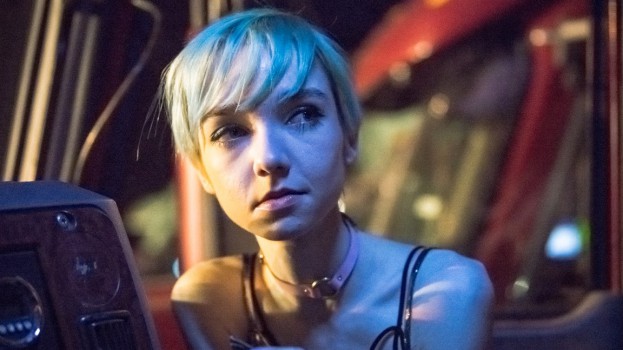 Honey Bee is an affecting drama about a street kid who gets a chance at self-discovery.

The movie saw its first year of life on the festival circuit and has already raked in a handful of awards.

Honey Bee (Julia Sarah Stone) is a waifish child we first meet as she gets a tattoo of her boyfriend’s name: Ryan. They are very romantic together, Honey Bee and Ryan (Steven Love), but what looks like young love is actually grooming.

Ryan has a stable of girls and he keeps them busy turning tricks at a truck stop.

Honey Bee has a real name — Natalie — and a brief personal history of abandonment. She has been discarded. Not yet 18, she has been acquired by Ryan and controlled by ersatz affection and veiled threats; despite what Hollywood likes to show you in the way of violent kidnappings and third world countries, this is the sad, sordid reality of human trafficking.

When the cops pick Honey Bee up and take her to a new foster home in Northern Ontario, she anticipates more and different abuse and not much else.

The new foster home is on a farm. The household is run with a firm hand by Louise (the ever-underrated Martha Plimpton), and there are other foster kids living there. And chores to do.

“We’re a family. You pitch in or your leave,” says Louise. Honey Bee just rolls her eyes.

Julia Sarah Stone’s performance carries Honey Bee. Stone is entirely vulnerable here, prickly with anxiety when she first gets to the new foster home. She’s like a trapped animal, waiting to know where the next blow will land.

With a short fuse and a sharp tongue Honey Bee gets into trouble at home and at school, kicking hard at any boundary.

But change is coming. Honey Bee’s progress toward some sort of awakening is a series of baby steps, small moments of connection taken from everyday life. It can’t be coincidence that this tiny perfect gem of close observation is both written by (Bonnie Fairweather and Kathleen Hepburn) and directed by (Rama Rau) women.

The film has a great cast and includes standout performances from Michelle McLeod as Honey Bee’s dweeb roommate at the foster home, and Spencer Macpherson as one of the cool kids at school.

Every element of Honey Bee involves clear-eyed storytelling, and not a single sound or sight has anything showy or extraneous about it. There’s nothing standing in the way of complete emotional investment.