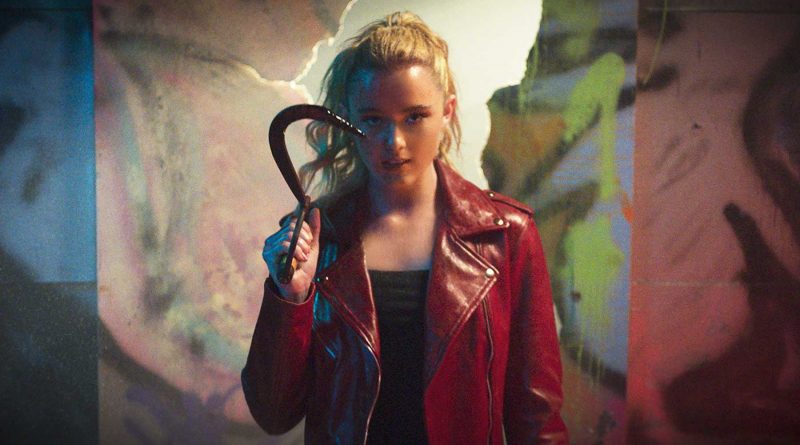 Horror movie lovers owe a debt of gratitude to Jason Blum and all the folks at Blumhouse for valiantly aiming to distract from the real life horrors of 2020. That production company has been all over the streamers and theaters this fall. Now the new horror comedy Freaky lands in time to splash cinematic blood all over Thanksgiving, and there will be lots of homebound horror fans who will be 100% there for it. Directed by Happy Death Day’s Christopher Landon, the film is a twist on Freaky Friday, with the supernatural switch happening not between mother and daughter, but middle-aged serial killer and grieving high school cheerleader. Vince Vaughn plays the ‘Blissfield Butcher’ turned teenaged girl, and Kathryn Newton plays Millie, who inadvertently shifts from outsider to hottest girl in school when a killer soul takes over her body, donning a red leather jacket and the furrowed brow of the determined, effectively creating ‘Butcher Barbie’.

Freaky will have you vaccinating between “OMG what a bloody, hilarious take on that body switch flick I watched when I was 9!”, “Damn, this is a one-trick pony, but I don’t seem to care”, and “Vince Vaughn, you look like you’re having way more fun as a teen girl than you did as Norman Bates”. To be sure, some of Vaughn’s choices as Millie are a little silly, but he’s never less than completely committed to the role, and it shows. Newton does well in her portrayal of a grieving daughter trying to find her footing again after the loss of her father. There are several other standouts in Millie’s besties Nyla (Celeste O’Connor of Selah and the Spades) and Josh (Misha Osherovich), both of which offer some meta moments subverting the tropes of the woman of color and gay friend in horror movies.

Freaky is another entry in the ‘awakened horror storylines’ category, with more fleshed-out female characters showing power and more diverse casting, but this one definitely works, and buzzes along fast enough to excuse the one-note concept. Millie’s grief lends weight, and the Butcher’s singleminded need to kill, regardless of what skin-sack he’s wearing, keeps the movie both funny and a bit frightening. Did I mention there’s a lot of blood? At its core, it is a slasher movie, with the gore to prove it. Vince, keep finding things that bring you the kind of joy this role gave you. We promise we’ll watch you more if you do.