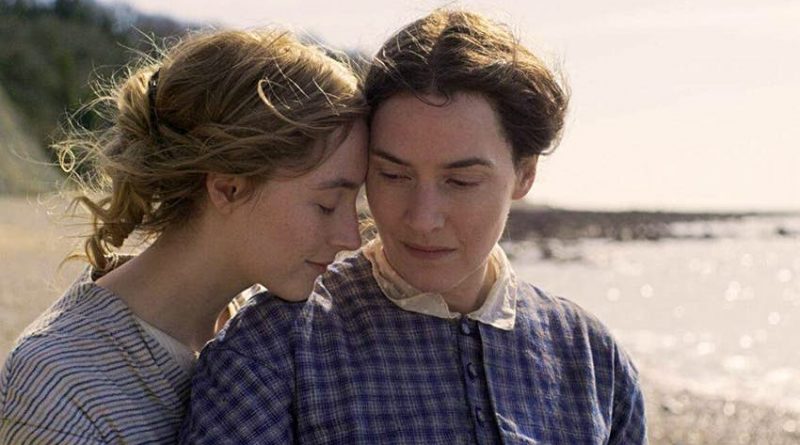 Three women. Mary Anning (1799-1847), an amateur and autodidact of necessity, being female, was one of the foremost paleontologists in British science. She uncovered the first ichthyosaurus (a Jurassic ammonoid) to be recognized by the London Geological Society. Charlotte Murchison is known as a geologist, and Elizabeth Philpot as a fossil-finder.

These three women supported each other as scientists when men, like Charles Lyell, would not even allow them to attend their vaunted lectures. Do not look for Ammonite to reveal all the obstacles that Mary Anning endured. Look, instead, for the film to keep science in the shadows and same-sex center stage, despite lack of proof that Anning and Murchison ever had sex. The sex scenes between the women are choreographed and photographed at length, but their affair is hard to reckon.

Kate Winslet plays Mary Anning as trousered and unkempt, dropping f and s bombs and her cigarette butts on the rocky beach. Saoirse Ronan plays Murchison as a delicate flower. They are vibrantly supported by Fiona Shaw as Philpot, Gemma Jones as tubercular Mother Anning, Alec Secareanu as the doctor, and James MacArdle as Mr. Murchison (naturally, frontally naked in one scene);.

Stéphane Fontaine’s cinematography captures the light of candled interiors and clouded exteriors. The scene of the two women on either side of the vitrine in the British Museum where lies Anning’s fish finally focuses the film on science. Sarah Finlay’s production design contrasts the Annings’ humble home with the Murchisons’ manor. Michael O’Connor’s costumes are correct right down to the unders. Throughout, ocean sounds define the setting by the sea in Lyme Regis.

Ammonite may not be totally true, but at least it brings these women’s names before the public. More can be learned about Anning by reading Tracy Chevalier’s novel, Remarkable Creatures, or the recent, ground-breaking collected biography of women paleontologists, Rebels, Scholars, and Explorers.