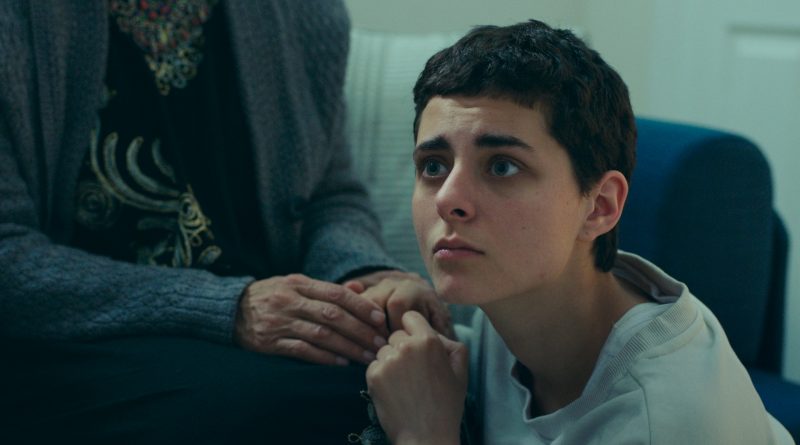 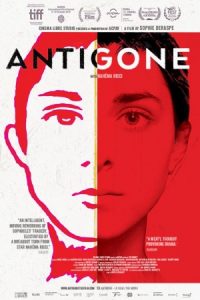 We learn that Antigone and her siblings and grandmother came to Canada when she was a toddler, fleeing the death and destruction of their Middle Eastern home country. They’ve made a happy enough life in Montreal as permanent residents, but none of them are citizens — a fact that becomes desperately relevant when a tragic confrontation leads to the arrest of Antigone’s brother, Polynices (Rawad El-Zein), and he’s slated for deportation. Antigone concocts a daring scheme to free him from prison but winds up detained herself, and she must decide what to do next.

Complicating matters are revelations about both Polynices and Antigone’s other brother, Eteocles (Hakim Brahimi), as well as Antigone’s romance with classmate Haemon (Antonie DesRochers), whose father happens to be a politician with a reputation to protect. But her uncompromising loyalty to her family — “my heart says to help my brother” — inspires activism among her supporters, and her case becomes a media sensation.

Anchoring everything are Ricci’s bravura performance and Deraspe’s smart script and confident direction. The rapid-fire bursts of social media activity and smart character details add timely authenticity to her update of a millennia-old tragedy. And the way she captures Ricci’s expressive eyes and her character’s hard-won smile make it clear that their work together in Antigone was a true partnership. — Betsy Bozdech

Nikki Baughan: You don’t have to be familiar with Sophocles’ Greek tragedy to appreciate Sophie Desraspe’s modern retelling as a powerful piece of work. Updating this family drama to French Quebec, and framing it within the claustrophobic confines of the immigrant experience, Desraspe widens out the text to explore contemporary prejudices surrounding race, class and gender. Read full review.

Pam Grady: A refugee family loses its tenuous grip on life in Montreal in the wake of the eldest son’s violent death at the hands of police and the arrest of his brother in Sophie Deraspe’s breathtaking contemporary spin on Sophocles’ classic drama. Teenage Antigone (Nahéma Ricci) responds to Polynice’s (Rawad El-Zein) incarceration and possible deportation by resolving to take his place. How that attempt plays out acts like a prism revealing a young girl’s devotion to her family in the face of merciless bureaucrats, the pangs of first love, the tentative situation in host countries that leave refugees essentially stateless and deprived of rights, and the viral power of social media to spotlight injustice. Ricci in her first leading role is astonishing, shading Antigone with courage, vulnerability, and the determination to keep fighting even when all seems lost. The drama is specific to the refugee experience but in its outline of a young person taking the lead in a fight against injustice, Antigone becomes a stand-in for activists all around the world.

Sandie Angulo Chen: Antigone is an extraordinarily affecting adaptation of Sophocles’ ancient Greek play set in modern-day Quebec. The film follows the titular Antigone (Nahéma Ricci) the youngest in a family of refugees from an unspecified Middle Eastern country. When Antigone’s eldest brother Eteocles is shot by the police while her other brother Polynices is arrested, she feels compelled to help Polynices escape from prison. Writer-director Sophie Deraspe weaves the classical play’s storyline with aspects of the police killing of Fredy Villanueva in Montreal back in 2008. Ricci is outstanding, with her Zooey Deschanel-sized blue eyes and expressive, almost balletic, movements throughout the film. Those who remember the play from high school or college will take heart that Deraspe’s take on the tragedy isn’t quite as bloody, but it poses the same questions about divine law versus human law, duty to family versus duty to self, and in this particular case, the way immigrants can be misunderstood and mistreated in their new countries.

Leslie Combemale An award winner for director Sophia Deraspe from her adaptation of the original play, her film Antigone brings a tragedy that is thousands year old and places it in the here and now, making it just as dark and desperate. Social realism keeps the story vital, and forces the audience to watch the devolution of a young woman who chooses to shoulder responsibility and stand for her family when even they themselves will not, destroying herself in the process. Not all performances reach the heights of lead Nahéma Ricci. She drives the film, and there isn’t a momentary chink in her emotional armor nor a second in which she isn’t entirely present in her character’s truth. She is transcendent.

Loren King Sophie Deraspe’s very contemporary film is loosely based on the Greek myth. But there is nothing stale or stodgy here. Deraspe has made a film that it is immediate, visceral and vibrant, one that’s worthy of its title and lineage. As Antigone, newcomer Nahema Ricci’s a Joan of Arc figure for the social media age in Deraspe’s bold, modern film. Read full review.

Susan Wloszczyna: From Canada comes a fresh take on the woes that face desperate immigrants who flee violence and upheaval in their homelands. What gives this particular interpretation added depth? It’s based on a 2,500-year-old Greek tragedy — namely Sophocles’ Antigone. Set in Quebec, we meet an Algerian family that consists of two sisters, Antigone and Ismene, and, two brothers, wise-guy Polynice and ace soccer player Eteocle, who have fled their country with their grandmother after their parents are found slain. Read full review.

MaryAnn Johanson Sophie Deraspe find a smart path for her transposition of the Greek tragedy to modern Canada by setting it among a refugee family, whose bonds are all they retain of home, as they come up against police misconduct and immigration law, where we see some of the gravest injustices of the Western world playing out today. Sophocles’ themes of family honor, a morality higher than civic law, and the integrity of accepting the consequences of your own actions work beautifully here, and Nahema Ricci’s magnificent performance in the title role takes on the extra dimension of underscoring the burden girls and women often assign to themselves of holding a family together through tough times. This is a stunning film of ethical and emotional ambiguities.

Kathia Woods Antigone is a modern adaptation Sophocles’ tragedy. That’s where the similarities end. New star Nahéma Ricci gives an electrifying performance as Antigone in an equally stellar screenplay by Sophie Deraspe. At the heart of the conflict is immigration. Giving us another critical view of how migrating to a new country isn’t as uncomplicated as modern politics deem. The other theme in this film is family. Antigone and her siblings relocated to Canada after the murder of their parents. Not citizens but residents, they insert themselves into Canadian day to day life while holding on to one another. This new life brings conflict and temptations. The cinematography and acting in this film are stellar. It’s also not surprising that this was Canada’s entry into the 2019 Oscar race. The biggest may take away from Antigone is that it’s all of our jobs to protect the youth. Not just family but for us, the community. It’s our job to peel away the layers. That is the film’s most significant gift.

Jennifer Merin Antigone, Quebecois filmmaker Sophie Deraspe’s brilliant contemporary adaptation of the classic Greek tragedy, is set in present day Montreal. The film keeps the original character names but recasts them as a bright high school girl and her family, all of whom are refugees from a war-torn Middle Eastern Arabic-speaking country and who are now facing very challenging issues about family loyalty, cultural roots and ‘fitting in.’ Nahema Ricci delivers a stunning breakout performance as Antigone, a young women with an indomitable spirit and diehard commitment to doing what she deems to be right and righteous. Antigone won AWFJ’s EDA Award for Best Female-Directed Feature Film at Whistler Film Festival in 2019. Ours choice was obviously a very good one — because Antigone was Canada’s official submission for the 2019 Oscars!

Nell Minow: Sophie Deraspe shows the enduring vitality of eternal themes with this modern adaptation of the Sophocles play. The contemporary setting changes the details and makes superb use of cinematic storytelling techniques to make the essential story of courage and integrity as immediate as this morning’s newspaper.

Cate Marquis Sophie Deraspe’s Antigone resets the classic Greek tragedy in contemporary Quebec as an immigrant story, with astonishingly successful results. Canada’s official Oscar submission for this year, Antigone is both faithful to the essence of the original work and a remarkable, fully modern and devastatingly effective exploration of immigrant experience, a powerful drama that is also grounded by a brilliant performance by Nahema Ricci as Antigone.