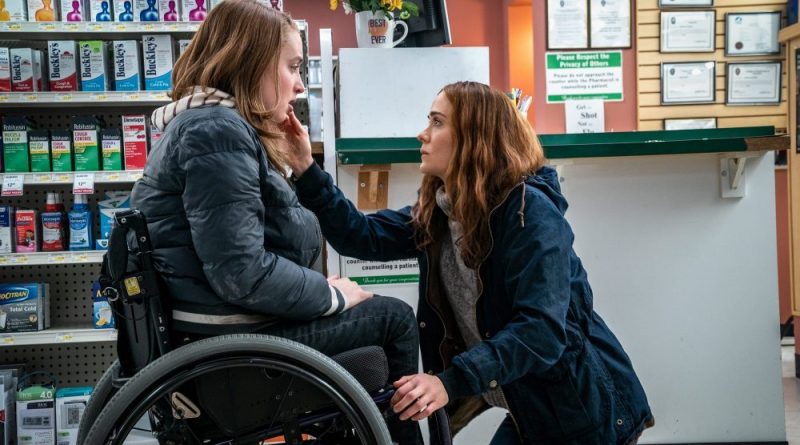 Words cannot describe the love a mother has for her child. Her methods of nurturing, protecting and selfless sacrifice are undeniably laudable. Every day, the child is blessed to have someone who unconditionally gives them a shoulder to lean on, cry and laugh. Sadly, there is a side-effect to that love, called an unhealthy obsession.

Chloe (Kiera Allen) spent her life in a wheelchair. She always relied on her mother for everything. Diane (Sarah Paulson), on the other hand, gave up her entire life for the well-being of her only child. There is nothing she would not do for her. Or is it? Everything starts with Chloe suspecting that her mother is hiding important information from her, not realizing that, perhaps, it’s for her own sake. And she better stop digging deep otherwise nobody would be able to protect her from the web of lies she may soon find herself trapped in.

Written by Aneesh Chaganty and Sev Ohanian and directed by Aneesh Chaganty, “Run” is more than just a story about motherly love. There is a truth in it that’s terrifying and real. It’s a story that will give you a headache and keep you worried till the end. It starts with a happy Chloe who seemingly has nothing to be afraid of when she has Diane by her side. She constantly waits for a letter from the University of Washington, hoping she will get accepted. However, the long-awaited letter is in no hurry to arrive any time soon. As you watch Chloe and her mother, you feel that there’s something awry about them. Moreover, there is an unsettling feeling about Diane that will grow in you as the story unfolds.

Unfortunately, the worst happens when Chloe gets deep into her health condition, which, in the beginning, was listed as long-term issues to explain why Diane is so protective of her only child. However, as the story progresses, you will want Chloe to run as far as possible from the very person that is supposed to have shielded her; Diane becomes a problem herself and Chloe will need all the courage in the world to fight against her own mother.

Sarah Paulson, as a maniacally obsessed mother, is superb. Every line, gesture or just a look opens up Paulson’s Diane layer by layer, allowing us to know more about her than a simple script could reveal. But it’s Kiera Allen, the newcomer, that shines across the board. Her performance alongside a seasoned actor such as Paulson is powerful, deep and impressive. The young actor manages to capture all the emotions and fears her character, Chloe, goes through, keeping us on the edge of our seats.

To conclude, I found the concept of the film to be very interesting and real. Without revealing much, the story is something that might as well happen across the street or within one’s neighborhood. The story of Run reminded me of Stephen King’s Misery and the true story of Dee Dee Blanchard and her daughter, Gypsy. But what it offers towards the end is mind-blowing, thrilling and simply cannot be missed. We need to know more stories like this not because they are thrilling and entertaining but because they allow us to keep our eyes open to things that can help us identify real-life situations which, without films like this, we wouldn’t know about.