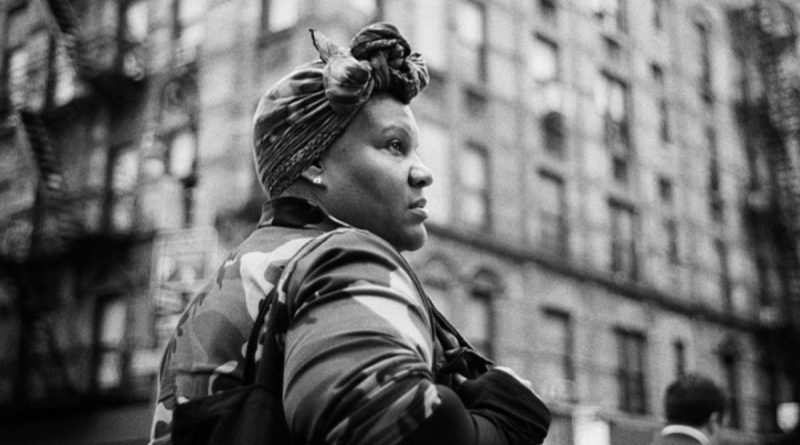 A dare. In fact, a double-dog dare: try to take your eyes off Radha Blank from start to finish of her auto-bio-doc, The 40-Year-Old Version. From the moment the camera captures her looking out her apartment window she mesmerizes as she tells her magnetic story.

The title varies another movie title, The 40-Year-Old Version, but it’s for sure that Blank is no virgin, not sexually or artistically. After all, she was honored in a magazine listing of 30-Under-30 “artists to know” 10 years ago. But, now, she’s teaching young adults how to write plays as she continues to try to sell her own stageware. Her agent is a dear, old, gay, Korean high school friend; he suggests she compromise instead of demanding integrity as a black woman.

And, then, rap raps on her door. So she raps on the door of the beat master named simply D. He is nominally impressed that this old lady has words, and he sets her up with a show. She bombs, repeating “Yo” like a yo-yo, and agrees to compromise on her play, “Harlem Ave.” However, she cannot forget the new-found power of rapping.

Blank herself is a force to be reckoned with, do-rag and all. Her moués charm, her nail flicks delineate, her sucks at a straw define. Every word she writes, every word she speaks (including carpet-bombing the s word), every word she rhymes is one more word for women and Blacks and, it turns out, for motherless daughters. That last is a subtle but telling skein that textures Blank’s autobiographical script. Brilliantly included is sharp, often self-deprecatingly incisive humor (an outfit for opening night makes her look like an “angry mushroom”).

As director, Blank’s juxtaposition of chapters as well as the position of cameras balances her exquisite use of the symbolic black and white film, opening with an establishing portrait of her black face bathed in white light through a window. For her direction, Blank won an award at the Sundance Film Festival.

The 40-Year-Old Version holds promise for story-tellers, for aging, for writing, and for compromising — or not. Radha Blank is a tour de force.