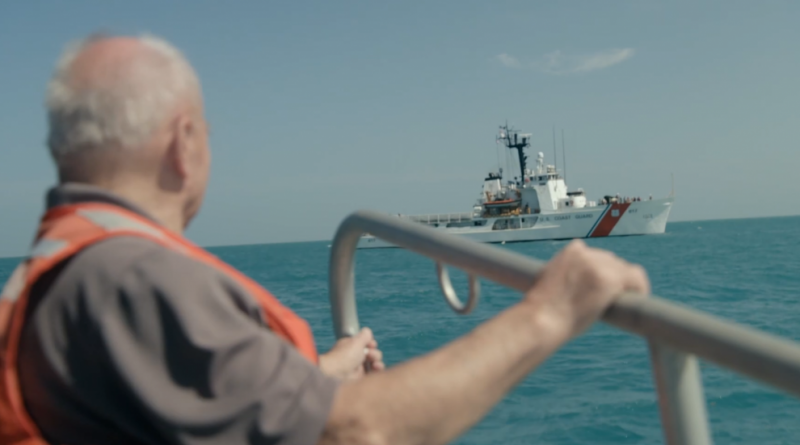 At its core, The Jump is about a leap into faith — literally. In 1970, Simas Kudirka, a Lithuanian sailor, was on a Soviet ship just off the coast of Martha’s Vineyard; the Coast Guard ship the USS Vigilant was there to keep an eye on them. Even though it was the height of the Cold War, the sailors from the two countries waved, shouted hellos, and tossed keepsakes to one another. Just before the Russian ship turned away, Kudirka saw a chance for freedom, and jumped. When he made it to the American vessel, he asked for political asylum.

He didn’t get it.

The American sailors, unsure of what to do, couldn’t reach anyone in Washington who could give them guidance. The Soviet officers, seeing their chance, grabbed Kudirka, beat him, and dragged him back onto their ship. Upon his return to the Soviet Union, he was tried for and convicted of treason, receiving a 10-year prison sentence. And that’s where the story of “The Jump” really begins.

Director Giedrė Žickytė lucked out with Kudirka as her subject (without revealing any other spoilers, it is necessary to know that Kudirka is alive). He is a fascinating, thrilling storyteller, and allowing him to tell his own story — complete with visits to both ships — means audiences get a firsthand account of his journey from hope to terror to hopelessness (though one does worry about him when he’s running around at night on a ship that’s pitching wildly in the water). He’s a sharp contrast to her interviews with the American sailors who were on board when Kudirka made his fateful leap; their stillness at least partially conveys the helplessness the felt as they watched Kudirka be dragged into the unknown, as well as their clearly continuing regret they didn’t do more.

Žickytė ably combines interviews with archival footage to tell the story that’s the kind movies are made of (and it was in 1978 with The Defection of Simas Kudirka in which Alan Arkin played Kudirka). She continually reminds the audience that, though Kudirka became a symbol in the Cold War as the US and the USSR battled over who got to keep him, he was first and foremost a young man who risked nearly everything for a chance at freedom and got the exact opposite, at least partially due to the bumbling of the United States. She also reminds us, though, that the US sailors were young men whose uncertainty, and not cruelty, was the cause.

In the end, Žickytė tells a good story and tells it well. She combines the words of activists, politicians, and even those who were schoolchildren at the time to put human faces to political action; she knows it’s best to tell a big story through its smaller moments. Yes, Kudirka became a symbol of and even a metaphor for the Cold War, but Žickytė emphasizes that his story started because he was a young man who tried to leap to freedom, but missed by inches.