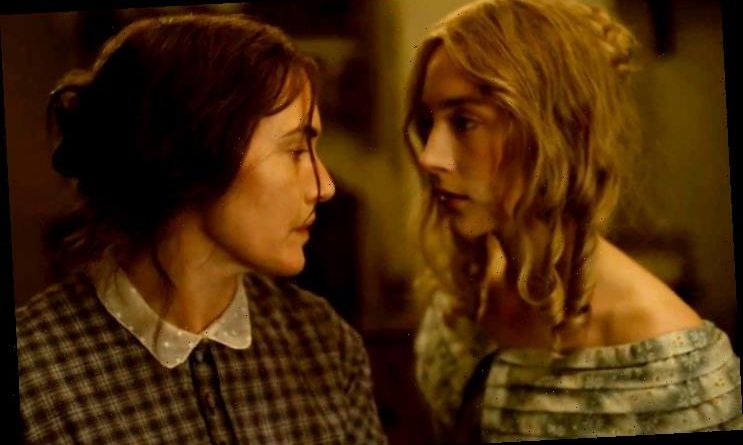 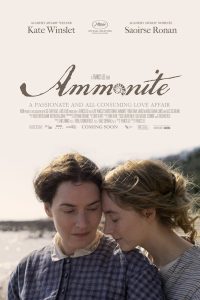 Mary is eking out an existence in windswept Lyme Regis in the early 1800s, hunting for fossils and shells to sell to tourists in the shop she runs with her consumptive mother, Molly (Gemma Jones), when geologist Roderick Murchison (James McArdle) arrives, with his wan wife, Charlotte, in tow. Roderick admires Mary’s work and hopes to learn from her; when other matters call him away, he leaves Charlotte — who’s recovering from an illness — behind, under Mary’s supervision, so she can rest and do some restorative sea bathing.

At first, Mary has little use for the pampered Mrs. Murchison — and Charlotte finds Mary brusque and unsympathetic. But after Charlotte ends up with a raging fever and Mary nurses her through it, they soften towards each other. And then a powerful attraction kicks in, and the two women become lovers. Each finds comfort and inspiration in the other; Mary smiles far more often, and Charlotte learns the satisfaction of hard work and collaboration.

Writer/director Lee has been open about the fact that his take on Mary and Charlotte’s relationship is based more on his interest in exploring themes of class, gender, and sexuality than on hard evidence. But we do know for sure that Mary Anning never got the respect or status she deserved as a pioneering scientist while she was alive, largely due to the fact that she was a woman. And it goes without saying that life was hard back then, especially for the poor. By painting a realistic, unglamorized picture of Mary’s circumstances, Lee’s drama creates a reality that helps us better understand what life was probably like for her — and how prized any chance at happiness would have been. — Betsy Bozdech

Nikki Baughan: British filmmaker Francis Lee follows up his stunning 2017 debut God’s Own Country with this period drama which may be larger in scale, but retains the writer/director’s sensitive attention to detail. The increasingly intimate relationship between 19th century Dorset fossil hunter Mary Anning (Kate Winslet) and convalescing young visitor Charlotte Murchison (Saoirse Ronan) may be at the heart of this narrative, but, through this prism, Lee’s screenplay explore themes of gender and sexual oppression that remain painfully recognizable nearly 200 years on from when this story is set. Read full review.

Susan Wloszczyna: No one would confuse the 19th-century romance Ammonite – a type of rare fossil — with dynamite. It’s the type of slow-building period piece that allows a character to reveal she is gravely ill by coughing into a hanky and then showing us it is spattered in blood. It also takes it time to simmer to a full-on boil emotion-wise while eventually heading to a tsunami of bodice-ripping lady love. Read full review.

Loren King With his stunning 2017 debut feature God’s Own Country, writer/director Francis Lee created complex gay and working class characters and put them front and center. His follow up, the romantic, historical drama Ammonite starring Kate Winslet as real-life, self-taught British paleontologist Mary Anning who lived and worked on the coast of England in the 1840s, does the same for women straightjacketed by both gender and class. Read full review.

Nell Minow: The sense of discovery and the healing powers of the natural world are powerfully evoked in Ammonite, with tender, sensitive performances by Winslet and Ronan.

MaryAnn Johanson I hate that Ammonite is going to be compared to Portrait of a Lady on Fire, but this is the world we live in. It isn’t even that we get so few lesbian romances, or so few historical movies that center on women, although both of these things are true. It’s that we get so few movies that center on women as people with internal intellectual lives. And now we’ve gotten two only a year apart, so of course they must be similar. The enraging discourse aside, I’m happy to see another movie, in Ammonite, that paints women as complex people with desires — of the flesh and of the mind — that transcend the narrow range that our society affords us. And I very much look forward to the day when movies like this are not unusual.

Sandie Angulo Chen: Writer-director Francis Lee’s period drama Ammonite keeps getting compared to Portrait of a Lady on Fire, but in many way the film it’s reminiscent of is Angels and Insects. Both are character studies of intelligent “spinster” naturalists who unexpectedly find love. Kate Winslet’s Mary Anning is an autodidact paleontologist who rarely smiles, while Saoirse Ronan’s Charlotte Murchison is an aristocrat’s depressed wife left behind somewhat in Mary’s care. The character study doesn’t contain much of a plot besides the women falling passionately in love while Charlotte’s husband is away on a 6-week tour of Europe. The beautifully shot movie is memorable thanks to the impressive, nuanced performances by the two leads. Their love affair is a heartfelt and heartbreaking reminder of how trapped women were in their 19th century roles, even women who defied expectations.

Pam Grady: Writer/director Francis Lee (God’s Own Country) takes an unusual approach to 19th century paleontologist Mary Anning’s life. Rather than focus on her work and discoveries and her conflicts with a scientific community that was loath to credit a woman (and one lacking formal education, at that), he invents a romance. Years after her major discoveries are behind her when her shop has become a tourist stop, Mary (Kate Winslet) agrees to take married, upper-class Charlotte Murchison (Saoirse Ronan) into her home to convalesce from serious illness. As Charlotte’s health recovers, attraction between the women blooms. Set against the desolate, brutal coast of Dorset, the relationship unfolds as wildly erotic yet conflicted, the women separated by class and by Mary’s basic discomfort in any kind of society. Ammonite is a superior bodice ripper, carried along by Winslet and Ronan’s intense performances, Stéphane Fontaine’s gorgeous cinematography, and Lee’s attention to period detail. But one can’t help but think Mary Anning deserves so much more.

Jennifer Merin Ammonite, starring Kate Winslett and Saoirse Ronan in a quasi-truth based story about three underrecognized early 19 Century British women scientists — paleontologist Mary Anning (1799-1847), geologist Charlotte Murchison and fossil-finder Elizabeth Philpot — whose lives and careers intersect intimately in the small wind-swept seaside town of Lyme Regis in fossil-rich Dorset. As society would dictate, there are strict repressive restrictions placed on the women’s behavior, but there is also a very strong undercurrent of emotions. The film rolls out like a fascinating, seductive journey back in time to an earlier era in herstory, our story.

Leslie Combemale Rising above possible pidgeon-holing as ‘Portrait of a Lady on Fire: Stodgy English Version,’ with captivating performances by Kate Winslet and Saoirse Ronan, Francis Lee’s Ammonite successfully travels the fine line between expressing stifling repression and pent-up passion in this story of forbidden love between two 19th century women. The slow brewing chemistry between paleontologist Mary Anning (Winslet) and grieving socialite Charlotte (Ronan) is what drives the story, but it is accompanied by moments in which we witness the inevitable wither of women not allowed the freedom of expression and autonomy by the patriarchal society in which they must survive.

Liz Whittemore You are entirely aware of every minute of a nearly two hour run time, but realize that each one is necessary to build truth in Ammonite. The film is about time and intimacy as well as class structure and societal convention. Saoirse Ronan is a lovely foil for Kate Winslet with a naivety that feels completely authentic. Winslet exudes powerful energy with sometimes less than a glance. The magnetic performances speak volumes. Ammonite is not only a love story but an expression of self-esteem and boldness.

Cate Marquis In Ammonite, Kate Winslett stars as Mary Anning, the legendary early 19th century British paleontologist whose fossil finds on the Jurassic coast of England helped establish the field of study, although Anning herself received little credit for her work. Working at a time when scientific endeavors were the domain of upper class men, amateurs who were as much collectors as not, Mary Anning faced discrimination based on both her gender and her social class, with men often taking credit for her finds. Through fine performances, Ammonite‘s historical fiction drama focuses less on Anning’s work and more on the repressive, restrictive treatment of all women in the era, regardless of class, explored through her relationship with Charlotte Murchison (Saoirse Ronan), the wife of one of the wealthy men buying Anning’s fossils who later went on to become a scientist herself.