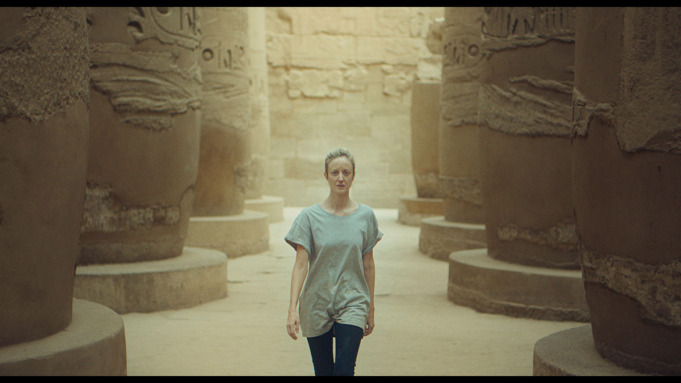 Andrea Riseborough gives a luminescent performance in Zeina Durra’s contemplative, hypnotic Luxor, her talent and poise radiating through the suppressed trauma that leaves her character, Hana, seemingly teetering on the edge of complete breakdown. A medic, Hana is in the Egyptian city of Luxor on a much-needed break between frontline work in Syria and a potential new posting in Yemen, desperately trying to drown out the horrors she has witnessed by immersing herself in the beauty of this spiritual, historical city.

For a great deal of the film, Hana’s backstory remains as unintelligible as the hieroglyphics that line the ancient walls, ones that she often runs her hands reverentially along as if trying to absorb some peace from the cool stone. Indeed, as Durra’s screenplay is intentionally sparse, Riseborough conveys much of her character through these small moments; her thousand yard stare as she listens to the clamour of conversation around her, a manic hotel bar dance that lurches from ballet to yoga to prone fugue state, the smile that never quite reaches her eyes. Her voice is soft, her demeanour often calm, she seems sometimes infinitesimally small against the colossal monuments which populate this place.

Yet there’s an epic storm raging with her. When she runs into her old lover Sultan (the hugely charming Karim Saleh), he doesn’t so much stir up old memories — most of which Hana claims to have forgotten anyhow — but pushes her to face all the things she has tried so hard to push away. That acceptance, when it comes, is a powerful, if restrained, moment of catharsis.

Luxor is well served by an evocative, melancholic score by Nascuy Linares and truly immersive sound design from Frederic Le Louet, which effectively captures Hana’s fractured mental state. Everyday sounds become intense before abruptly snapping into silence; the hum of the city, the chug of a boat, take on an ominous, intrusive tone. Equally, Zelmira Gainza’s cinematography straddles the normal and the surreal, and a sequence in which Hana and Sultan stroll through dusty streets behind a group of drunk singing youths beautifully encapsulates Luxor as a place forged by tradition yet forced to change with the times, particularly as the aftershocks of the Arab Spring revolution still reverberate in hearts and minds.

And, of course, Hana also resides in this no-mans-land between past and future. Riseborough is simply phenomenal as this fascinating woman who has been brought to her knees by her experiences, yet is increasingly determined to forge a happier path.