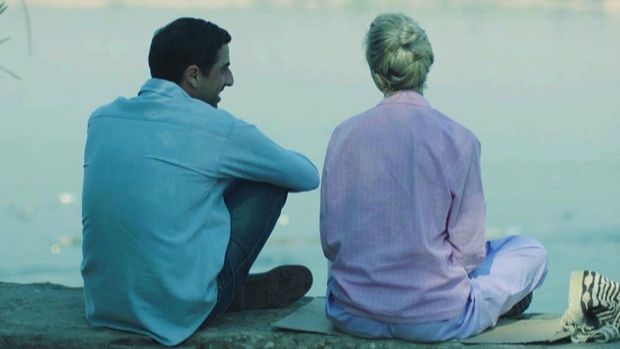 London-born Arab writer-director Zeina Durra’s Luxor is sort of a meditative throwback to the ‘60s era of art-house cinema when movies were allowed to not always fill in the plot blanks for audiences. That opened the door for viewers to insert their assumptions as to what is going on with the main character.

In this case that would be Hana (never-not-watchable Andrea Riseborough), a traumatized British doctor who is taking a much-needed break from tending to the victims she has encountered during the ongoing war on the Syrian-Jordanian border. That Hana looks and dresses like one of those inflatable flopsy-mopsy roadside characters who beckon customers into car lots and tire stores says much about her disoriented mental state at the moment.

She is hoping that her return to the title’s picturesque Egyptian city that she visited years ago, packed with oversized ancient ruins whose hieroglyphic-covered walls bear witness to an enduring culture by the banks of the Nile will somehow revive her spirits. But given that her visit starts out in her hotel bar sitting next to a loutish American, who tries to impress Hana by offering to buy a round of drinks on the house for their fellow patrons, matters don’t start off well. That includes the fact she actually sleeps with the guy, having to sheepishly snatch her panties from under the covers and tip-toe out of his room while avoiding his presence for the rest of her visit.

Basically, this is a case of a medical pro trying to heal herself, connecting with kind natives who innately seem to sense her need to recover her mojo. One woman gives her amulet that ensures rebirth and regeneration. While she tries to act as if she is simply on a much-needed vacation, Hana’s return to her happy place is an desperate act of hope for her future. Matters grow brighter when she runs into her former American lover and archeologist Sultan (Karim Saleh), whose layback personality and wry sense of humor lifts her mood, such as when he gets kicked out of the hotel pool for wearing just a pair of tighty whities.

The ending of Luxor teases that Sultan and Hana might have some future together, even if she is reduced to awkwardly twirling about to tinkling piano music in a drunken haze. While she might not have found a magic potion for her doldrums in Luxor, at least the socially distanced among us get to enjoy a colorful travelogue at a time when going anywhere outside your house feels like a luxury.