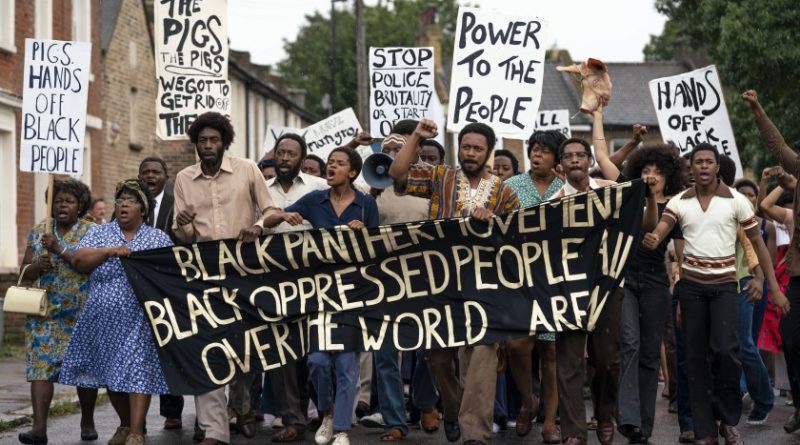 The French have an appropriate saying, “Plus ça change, plus c’est la même chose,” that is, “The more things change, the more they stay the same.” This came to mind as I watched British director Steve McQueen’s Mangrove. Set in west London’s Notting Hill area beginning in 1968, it maintains disconcerting relevance today with racism on full display.

Based on real events, the title comes from the Mangrove restaurant, owned by Trinidadian Frank Crichlow. This haven for its immigrant Caribbean community proudly serves West Indian food under Black ownership, as Frank boasts. Prevalent, brutal police prejudice sparks repeated, illegal and destructive raids and appalling harassment of Frank, his workers, and patrons, leading to a peaceful protest march. That ends with police initiated violent confrontations and arrests of those dubbed “The Mangrove Nine,” including the leader of the British Black Panther Movement, Altheia Jones-Lecointe, activist Darcus Howe, and Chrichlow.

A subsequent trial, alternately comical and infuriating, in the iconic Old Bailey, the British court only for serious crimes, dominates a dynamic second half of the film. Lawyer Ian McDonald represents the accused, but, significantly and impressively, Howe and Jones-Lecointe represent themselves with clever, strategic challenges.

Cinematographer Shabier Kirchner moves gracefully and energetically through indoor and outdoor spaces, capturing the look and feel of 70s film. Skillfully edited by Chris Dickens, rousing music adds energy and ambiance to scenes of this close knit collective. Superb acting enhances a naturalistic feel, a sense of being right there in the moment. Among the excellent contributors, Letitia Wright as Altheia delivers an inspired performance, as do Shaun Parkes as Crichlow, Malachi Kirby as Howe, and, as repellant Police Constable Frank Pulley, Sam Spruell who doesn’t hold back, embodying the ugliest racist, one with authority and power.

As with his Twelve Years a Slave, McQueen shows his genius for powerfully dramatizing gripping history of a joyful collective fighting an oppressive social system. The first of five films co-written and directed by McQueen for his Small Axe anthology (that title from a Bob Marley song), Mangrove streams on Amazon Prime.