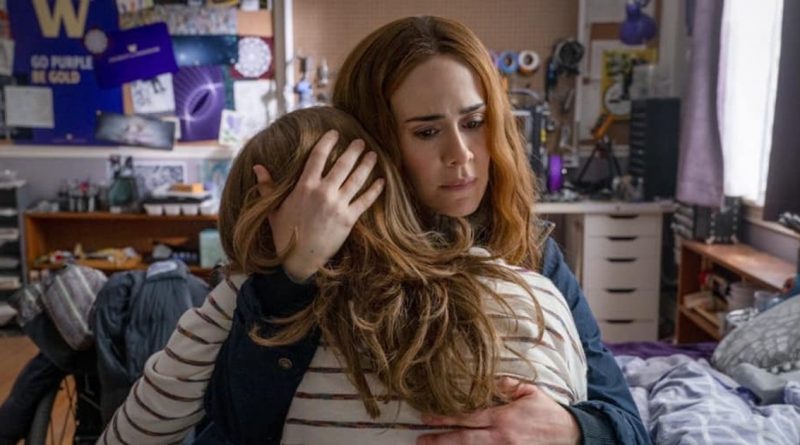 After Netflix’s Ratched, Sarah Paulson has become TV’s malevolent angel-of-mercy. In this new thriller, she plays a possessively controlling mother suffering from Munchausen syndrome-by-proxy. That’s a mental health issue – a form of child abuse -in which a warped caregiver causes an illness to a person under her care – like a child with a disability.

As a self-sacrificing single mother, Diane Sherman (Sarah Paulson) has devoted the last 17 years to caring for her ‘special needs’ daughter, Chloe (Kiera Allen), who is paralyzed from the waist down, asthmatic and diabetic with serious heart and skin issues.

Despite her handicaps, Chloe is smart, resourceful and eager to attend the University of Washington. “Chloe’s the most capable person I know,” Diane tells some fellow homeschoolers.

Problem is: Chloe suddenly discovers that the new green-and-white pills that her mother is feeding her are prescribed for her mother, not her. Suspicious, Chloe is determined to find out what the medication is, which leads her into questioning everything else about her life.

This is the first time in 70 years – since Sign of the Ram (1948) – that a Hollywood film has featured a wheelchair-confined character portrayed by a disabled actor. Newcomer Kiera Allen uses a wheelchair in real life.

“There’s so little media representation of people with disabilities that I feel like I’m representing an entire community, not only in the authenticity of casting, but also in the story,” Allen says. “This is not a girl who’s made to be a victim or who’s only there to inform another characters journey. Her disability is part of that, but it doesn’t define who she is. It’s similar to the way I view myself.”

On the Granger Movie Gauge of 1 to 10, Run is a sadistic, insidious 6, streaming on Hulu.