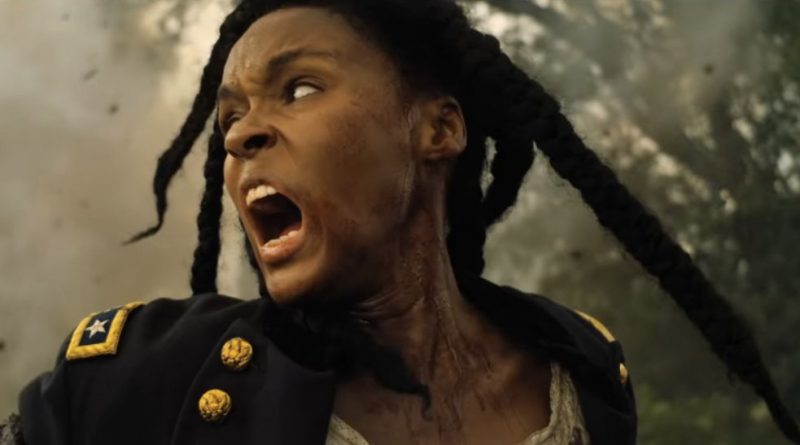 It begins with a slave, Eden (Janelle Monae), enduring agonizing brutality on a Southern plantation sometime during the Civil War. She’d love to escape but…then there’s a time-travel element.

Suddenly, Eden becomes Veronica Henley, a contemporary black woman, who recalls that her grandmother once told her: “Our ancestors haunt our dreams,” followed by an allusion to a William Faulkner quote: “Our past is never dead. It’s not even past.”

While outspoken, social activist Veronica is promoting her new, 21st century book aimed at Black women, encouraging them to make their voices heard and to harness their inherent power, Eden is forced to perform hard labor and endure sexual assault.

Confusing? Yes – but – at the same time – intriguing.

The only other character to ‘appear’ in both time frames is sneering Elizabeth (Jena Malone), who remains overtly racist and condescending throughout the concept, emphasizing the filmmakers’ assertion about apartheid, calling it “the original sin of America.”

In Eden’s life, there’s her slave friend Eli (Tongay Chirisa) and newly arrived Julia (Kiersey Clemons), who want to escape with her, but they’re continually thwarted by the barbaric plantation owner (Eric Lange) and sadistic overseer (Jack Huston), plus the marauding Confederate soldiers.

Filmmakers Gerard Bush and Christopher Renz – making their writing/directing debut – drop a few foreboding hints (like having the cotton that the slaves picked burned up at the end of the day), but it all leads up to a clumsy third-act twist, a conspiracy contrivance that’s reminiscent of M. Night Shyamalan.

Unfortunately, there’s no way to discuss this basic premise without spoiling it.

On the Granger Gauge of 1 to 10, “Antebellum” is a strange, shallow 6, an allegorical social thriller.