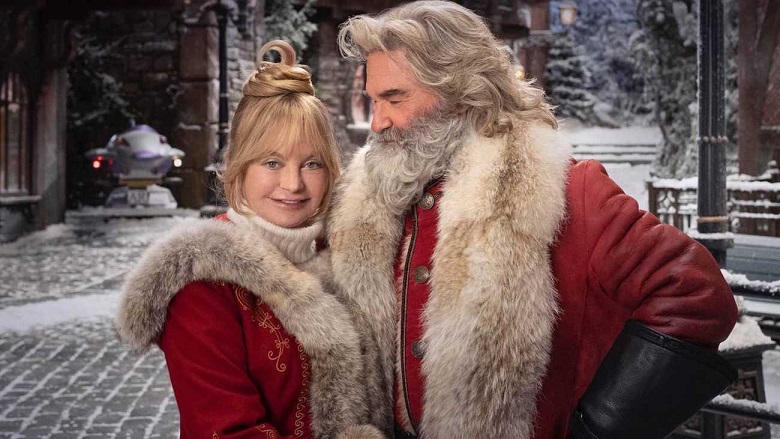 To get into the holiday spirit – you may be wondering what’s new at the North Pole.

Kurt Russell and Goldie Hawn team up for the first time in 30 years – since their 1987 comedy Overboard – under the aegis of Chris Columbus – to play Santa and Mrs. Claus.

She’s into serious sulking when nefarious Belsnickel (Julian Dennison), a banished elf-turned-human with a New Zealand accent, sends unsuspecting Kate and Jack through a wormhole to the North Pole.

Then they’re off on an Arctic action-adventure, complete with sleigh chases that eventually take Kate back in time to Boston’s Logan International Airport in 1990. That’s where Santa teams up with Darlene Love for an impromptu musical number – “The Spirit of Christmas” – with stranded holiday travelers.

Columbus slyly inserts some elf-centric fandom fun by having the Santa’s Village Theater playing “Elf.” Then when the elves are infected with ‘Elfbane,’ the marquee subtly switches to “Bad Santa.”

The Yulish (Elvish) dialogue was created by “Game of Thrones” language consultant David J. Peterson. And you can glimpse Chris Columbus’ real-life daughter, Violet, as the Airport cashier who gives Kate grief over a $20 bill.

Bottom line: there’s a family-friendly life-lesson that Christmas is more about who you celebrate the holiday with, rather than where you celebrate it.

On the Granger Movie Gauge of 1 to 10, “Christmas Chronicles 2” is a sweetly sentimental 7 – streaming on Netflix.