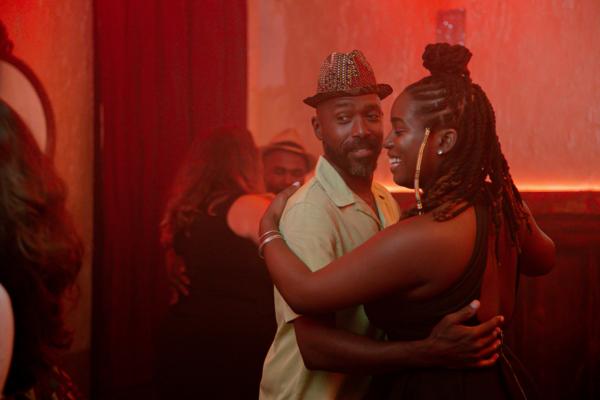 It’s quite the achievement to create a movie that feels as fluid as a dance. Writer/director Ewa Msangi achieves just that with Farewell Amor, a film that tackles the challenge of articulating reintroduction, second chances, and the risks and rewards of chosen intimacy for a family reuniting after 17 years. It is a rich character study shown in three acts, examining the perspectives of three supposed loved-ones, now near or complete strangers, wanting desperately to find a way back to each other. In her feature directorial debut, Msangi reveals herself to be a filmmaker with a deft and nuanced hand, and one to watch.

Angolan woman Esther (Zainab Jah) and her daughter Sylvia (Jayme Lawson) have come to the US after being separated from husband and father Walter (Ntare Guma Mbaho Mwine) for nearly all of Sylvia’s life. Each carry scars, whether from the Angolan Civil War, or the repercussions of having to live beyond that war without the safety net and the comfort of family. For each of the three characters, the story starts when they meet each other at Kennedy Airport. In that way, Msangi doesn’t dwell on their pasts, as much as what impact those experiences have on the present day. Esther, unlike when she and Walter were together, has become devoutly Christian, giving money they all desperately need to live as donations to the church. She lives in constant fear. Walter has found a place in New York, though he knows well what it means to be a Black man and an immigrant in America. In one of the most moving scenes of the film, he explains it is only through dance that they can truly be free to express and be fully themselves. Sylvia is trying to both be herself and keep her mother happy, but she strains at the way Esther keeps tight control over her, disregarding her love of dance, and disallowing the one way in which she finds personal expression.

It is how writer/director Msangi brings these characters together, the ebb and flow of it, the often delicate (and sometimes literal) dance they do around each other, that is moving and compelling to watch. Clearly they all want to belong to each other, want to be seen, to be accepted. The way Msangi threads the story, and brings it to its ultimate conclusion is deeply satisfying. It leaves a warm, joyful feeling for viewers that will buoy them, and arm them just a little against the next few days of Covid news. 2020 has been a year of relative isolation. Farewell Amor, and its characters, who choose to move towards rather than away from each other, erases that feeling, even if for only a little while. We’ll take that gift anytime, but to end 2020 with it is particularly special.