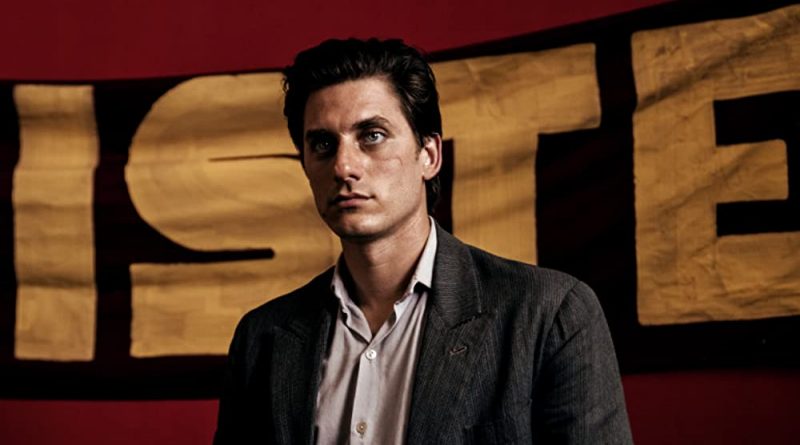 Luca Marinelli’s expression changes many, many times in Pietro Marcello’s bold and bewitching version of Martin Eden. Playing the eponymous sailor-turned-writer, so do his surroundings, fortunes, station in life and those he’s sharing his company with. The titular character’s age progresses, and so does his appearance along with it. What Eden is passionate about, and who, and how he views and processes the world all cycle through multiple variations as well. But, bringing his lingering screen presence to a protagonist first brought to life on the page by Jack London — 111 years ago, initially — Marinelli’s entrancing eyes remain a constant. The glimmer in them changes also, growing, fading, waxing and waning, but these windows to Eden’s soul always gleam with the fortitude of someone who knows how unforgiving the world can be, and the toll of hard work, and that this existence doesn’t ever treat everyone equally.

You don’t receive acting awards for emotion-filed eyes alone, but Marinelli certainly earned his 2019 Venice Film Festival Best Actor award several times over. His is a performance that a filmmaker can build a feature around, as Marcello has. It’s a portrayal so intricate and detailed that it feels as if it has been sculpted obsessively and painstakingly, like someone chipping at a block of marble for years. And yet, Marinelli’s efforts in Martin Eden also feel loose and lived-in, like someone kissed not just life but heart and soul into that meticulously carved creation. Marcello’s film — his second fictional feature, after 2015’s Lost and Beautiful — boasts far more than just riveting and mesmerizing work from its lead, but it also couldn’t have been better cast. That’s crucial; Eden’s journey is so multifaceted, layered and jagged, and so steeped in the ups and downs of an everyman, that it needs an anchor. Its star commandingly provides one.

When Marcello first introduces Eden, Marinelli imbues him with an earthy charm and radiant sense of assurance that are both more boyish and more worldly than his thirty-something years. A veteran sailor even given his age, he wants more than a job with his brother-in-law. He’s happy enough with the amorous affairs he sparks by the docks, though. Then, after saving wealthy Neapolitan Arturo Orsini (Giustiniano Alpi) from a stint of savagery by the sea, Eden meets his new pal’s family (including parents Elisabetta Valgoi and Pietro Ragusa). He quite quickly falls for Arturo’s sister Elena (Jessica Cressy) as well. And, he tumbles head over heels for the idea that he’d like to be educated enough not just to read the books that she opens his eyes to, but to write great literary pieces himself.

Eden’s path from there — from unschooled proletariat seaman to voraciously devouring texts, decamping to the outskirts to pen his own just as feverishly, weathering an ocean of rejection, and befriending his way to thornier trains of thought and quests for change — is twisty. That’s only part of his tale, too. His ideological evolution is similarly complex and lengthy, as he switches from the labours of a sailor to that of a writer, adapts his philosophies around socialism, individualism and class more than once, and continually sits on the receiving end of the well-to-do’s snobbishness and elitism (enough to make anyone want to eat the rich). With Marcello both co-scripting (with Piranhas’ Maurizio Braucci) and directing Martin Eden, this journey is both natural and dense. This isn’t a story about abandoning one’s modest and humble beginnings in the pursuit of wealth, fame and success, but a portrait of one man’s passage between the two extremes, and his forced interrogation of the very notions of success, worth and work along the way. Nothing can nor is simple as a result, not even when cinematographers Alessandro Abate (Born in Casal Di Principe) and Francesco Di Giacomo (Stay Still) are luxuriating in Marinelli’s stare.

Deepening Martin Eden’s narrative, Marinelli’s performance and the character study they combine to deliver is a task that mightn’t seem all that necessary from the above, but it’s one that Marcello excels at. Of course, the alternative and equally accurate perspective is that Marcello erects the framework, guides his excellent star through it, then keeps building with every choice, flourish, shot and edit. Martin Eden is a film that asks its audience to be cognizant of the many decisions behind every second, image and sound. The fact that it blends details from different time periods, as seen across costuming, decor, props, hairstyling and music, is one such purposeful move that viewers are always meant to notice. So too is the interweaving of historical footage, and the essaying of Italy before the way. In the process, Marcello anchors his everyman protagonist at every time. Eden is universal, as someone charting his intellectual, emotional and physical journey should be. He already embodies so much thanks to London’s prose, and then courtesy of Marinelli’s superb efforts as well, but Marcello ensures that this exceptional movie embodies just as much.