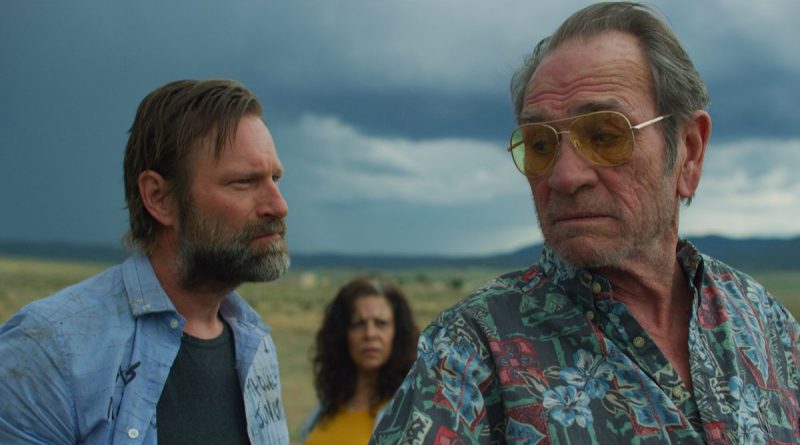 Just because you’re paranoid doesn’t mean they’re not out to get you.

That’s what a broken-down private eye discovers when he wanders into conspiracy and skullduggery in Wander.

Sometimes as crazed — and confused — as its paranoid protagonist, the intermittently gripping Wander whips up a cinematic fusion, offering contemporary twists on time-honored elements that would seem perfectly at home in a vintage film noir.

Rather than the mean, rain-drenched streets of an urban nightscape, however, Wandert
transports us to the sun-baked deserts of central New Mexico.

On the outskirts of the title town, an overturned vehicle bursts into flames — and a burst of gunfire cuts down the the young woman who’s managed to escape the fiery crash.

It’s hardly coincidental, as we shall see.

But, in the world of Arthur Bretnik (Aaron Eckhart, in fine frantic form), there are no coincidences.

A former police detective, Arthur lives in virtual isolation, in the “Middle of Nowhere” — as a sign at the entrance to his fenced property proclaims.

Haunted by a hit-and-run crash that killed his 9-year-old daughter and left his wife catatonic and in a wheelchair, Arthur has become an endlessly suspicious private investigator, popping psychotropic pills to control (sort of) his fevered brain.

Along with his good-ol’-boy buddy Jimmy Cleats (Tommy Lee Jones, ever the cool cat even when decked out in Boogaloo-worthy Hawaiian shirts), Arthur’s a regular Internet presence on a “deep state podcast devoted to all things conspiracy.”

But when a caller alleges a police cover-up in the investigation of her daughter’s mysterious death, Arthur can’t help but ride to the rescue.

What he finds when he wanders into Wander include some mighty ominous signs, from a hostile sheriff (Raymond Cruz) to a mysterious blonde (Katheryn Winnick) in a black hat.

There’s even an extended voiceover — Arthur’s audio case log — to extend the noir-style atmosphere as our detective plunges ever deeper into intrigue.

The combination works more often than not. But as Wander edges ever closer to the edge of reason — and over the edge of credibility — the movie struggles to maintain its grip. Just like Arthur.