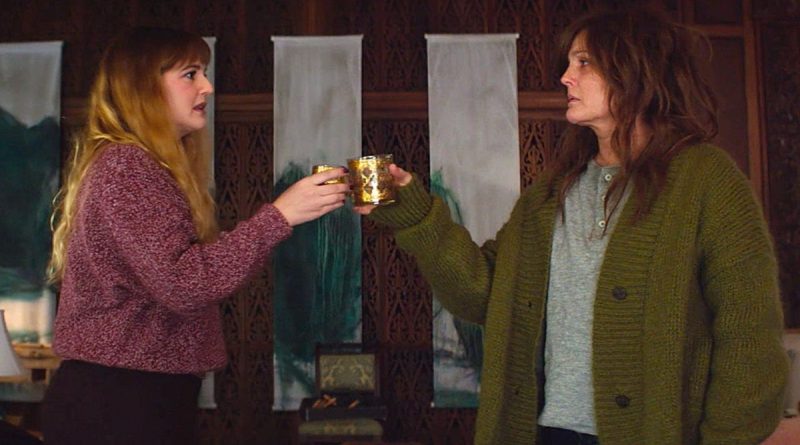 The Stand In is a curveball comedy with serious and darker themes hidden within the cleverly crafted comedic script that boasts Drew Barrymore, times two.

The Jamie Babbit-directed comedy starring Barrymore in dual roles is a slower paced cautionary comedy that shines with great performances by an ensemble of award-winning actors, including Michael Zegen, Ellie Kemper, T.J. Miller, Richard Kind and Emmy award winner Holland Taylor all. The picture was also an official selection of this year’s Tribeca Film Festival, and it completely resonates for these times.

Written by Sam Bain, the film centers on a sight gag comedy actress who now faces not only the challenges of charges of evasion, but is also beset by the viral social media spin caused by the posting of her on set epic meltdown caught on phone camera by an ethically challenged crew person. Specifically, the video video captured her on the sly after a drug fueled fracas with Ellie Kemper’s character in a scene directed by Holland’s character.

The freefall for our Candy Black (Barrymore) commences.

This nugget sets the action in motion, and it sheds light on issues of ethical behaviors on set, the social impact of addiction, and general workplace safety all in one tasty opening scene that sets the tone for the rest of the movie. Black is at the end of her tether, and she wants out. Luckily she has amassed enough assets to land on her face with a fluffy down pillow despite her destructive flame out.

Enter Barrymore’s other character, Paula, the slightly prosthetically enhanced “stand in” who is hired to double for Candy when Candy is indisposed. In one hilarious scene, Richard Kind, playing an “extra” on call for a job assignment, excoriates her for being a do-nothing “stand in”. Hierarchies in the acting profession are deliciously on display here, as Kemper’s character brazenly asks Paula demeaning career questions that push past acceptable boundaries. But, Paula’s massive ambition, long hampered by her sweet and sort of oblivious nature, is given the chance to expand when she’s asked to stand in for Candy in personal appearances that push her out of the supporting role and into the limelight.

Another plus for the film is the casting of T.J. Miller as the agent and enabler who sticks with Candy through her descent. Miller was the lynchpin to the success of Silicon Valley, and once he was off the show, it deflated. These themes of social media viral videos and meltdowns cut close to the bone here, as Miller was exiled for a spell after he left the HBO series. Miller is a huge comedic talent and kudos to Barrymore who, as producer, signed him on.

The construct of this trading places comedy meme is simple, yet loaded with complex subtext. Candy wants out of show biz so she can live her true passion and bliss, which is woodworking. In the shadowy world of internet chat rooms, she meets a man who, too, is passional about woodworking and an online romance is fostered.

The once homeless and struggling Paula, now called upon to substitute for Candy 24/7 is now living in Candy’s mansion and their lives are completely entangled. The entanglement mushrooms as publicists pick up on the “America loves a comeback story” ploy, and book Paula-as-Candy on talk shows and for personal appearances. Paula is so good at playing Candy, she fools everyone, actually changing the public’s impression of the real Candy’s persona.

Keeping spoilers at bay, know that Barrymore is perfect in her highs and lows, dressed down and glammed up, silly and pratfalling or seriously normal and ready to change her life. The “careful what you wish for” subtext of identity theft, on-set ethics, acting hierarchies, online dating facades, I.R.S. evasion, addiction and career disillusionment are all part of the engine that makes The Stand In an unusually relevant comedy that holds a mirror up to the times we are living in.

The Stand-In will be released in select theaters, on demand, and digital starting December 11.