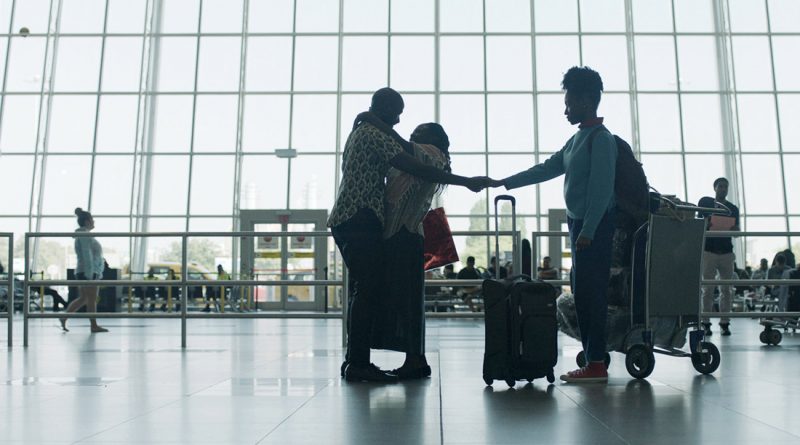 Love — and the best of intentions — may not be enough to overcome a 17-year separation for the reunited family of three who are at the heart of writer/director Ekwa Msangi’s touching first feature, Farewell Amor. This affecting drama raises thoughtful, heartfelt questions about what it means to be a family, And, it takes an honest and insightful look at the difficulties of immigration. 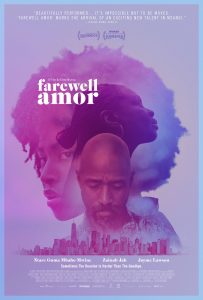 Walter (Ntare Guma Mbaho Mwine) has been in the United States for almost two decades, working the whole time toward the goal of having his wife, Esther (Zainab Jah), and their daughter, Sylvia (Jayme Lawson), leave Angola and join him in New York City. When their reunion finally happens, it’s an emotional one — but all too quickly, the realities of their situation become apparent: They are three virtual strangers sharing a tiny apartment in a busy, anonymous city.

Esther, who has become very devout in her time apart from her husband, wants to do her duty as a wife but misses her home and church community intensely. Sylvia, who chafes under her mother’s strict rules but also clings to Esther as her one constant in an upended life, hides the fact that dance is her passion. And Walter finds that the routines and patterns he’s gotten used to over the last 17 years aren’t as easy to shift as he’d hoped. He wants his wife and daughter to be happy, but he doesn’t know them well enough to know how to make that happen.

Msangi tells the family’s story from each character’s perspective, revisiting key moments and events after Esther and Sylvia’s arrival in the United States from their different points of view. Doing so help builds viewers’ empathy for all three of them, as well as deepen the story. As they take steps toward compromise and understanding, they come closer to finding the rhythm of a new life together.– Betsy Bozdech

Loren King One of the most realistic and insightful works of art about the immigrant experience, Ekwa Msangi’s beautifully shot and acted Farewell Amor is a revelation. It looks at three lives torn apart by war and displacement and is crafted much too thoughtfully and skillfully to resort to glib resolutions or political points. Instead, it weaves a delicate and moving tale of the messiness of separation and reconnection. Read full review.

Susan Wloszczyna: As a storyteller, Ekwa Msangi does something interesting after charismatic cab driver Walter (Ntare Guma Mbaho Mwine who oozes an elder sexy vibe), brings his spouse and child back to his small one-bedroom Brooklyn apartment. She splits up her narrative into thirds, allowing us to focus on each individual character’s story. We learn that Walter has been having a relationship with a nurse and is forcing himself to let go for the sake of his marriage. Sylvia, meanwhile, meets a boy at school who encourages her to sign up for a dance competition. As for Esther, she has grown increasingly more pious over the years as religion has become an anchor for her. Read full review.

MaryAnn Johanson This is a beautiful feature debut from writer-director Ekwa Msangi, which manages that rare cinematic feat of being specific and universal at the same time. This is a story of immigration that will be achingly familiar to many a diaspora, one of ties broken by economic necessity and difficult to reforge, of parents and children with very different experiences of moving to a foreign country in an attempt to build a new life. Lovely, heartbreaking, but ultimately hopeful. Read full review.

Pam Grady: An Angolan family separated since that country’s civil war reunites in New York to discover that they are practically strangers: Patriarch Walter (Ntare Guma Mbaho Mwine) built a life for himself in America on an assumption he may never be reunited with his spouse and child. His wife Esther (Zanaib Jah) has become a Christian fundamentalist. Their daughter Sylvia (Jayme Lawson) is a teenager, whose independent streak and love for dance vex her mother. In her atmospheric first feature, Tanzanian-American writer/director Ekwa Msangi limns the immigrant experience with warmth, empathy, and a laser-like focus on her sharply drawn characters. Msangi separates her story into three parts, each character’s experience reflected through their individual points of view. Strong performances reveal the family members’ conflicting emotions while evoking their individual dilemmas in trying to reconnect. For Msangi, this film is a calling card, one announcing a strong new voice in cinema.

Leslie Combemale It’s quite the achievement to create a movie that feels as fluid as a dance. Writer/director Ekwa Msangi achieves just that with Farewell Amor, a film that tackles the challenge of articulating reintroduction, second chances, and the risks and rewards of chosen intimacy for a family reuniting after 17 years. It is a rich character study shown in three acts, examining the perspectives of three supposed loved-ones, now near or complete strangers, wanting desperately to find a way back to each other. In her feature directorial debut, Msangi reveals herself to be a filmmaker with a deft and nuanced hand, and one to watch. Read full review.

Jennifer Merin Farewell Amor is a moving drama about the hardships of reuniting a family after years of separation due to immigration issues. Written and directed by Ekwa Msangi, the film focuses on an Angolan immigrant who is joined in New York by his wife and daughter after a 17-year separation. Now strangers who barely know each other and whose lifestyles are basically incompatible, Walter, his wife Esther and their teenage daughter Sylvia are suddenly sharing a small one-bedroom apartment, bumping elbows with each other as they struggle to reconnect, understand and accommodate each other’s habits and needs. As the story develops, it is their mutual love of dance that renews their mutual understanding, rekindles their love and brings them together again. Msangi and her wonderful cast reach into our hearts, eliciting empathy and sympathy.

Sandie Angulo Chen: Immigrant stories often focus on the pain of the arduous journey to a new place, so there’s something refreshing about Ekwa Msangi’s film Farewell Amor, which isn’t about pain but about intimacy. In the opening scene, Walter (Ntare Guma Mbaho Mwine), an Angolan taxi driver, picks up from the airport the wife and daughter he hasn’t seen in 17 years. It’s a tender moment, but when they return to his (now their) one-bedroom Brooklyn apartment, it soon becomes clear that reuniting after so long is bittersweet. Wife Esther (Zainab Jah) has become extremely religious, daughter Sylvia (Jayme Lawson) is shy, and Walter misses the kind lover who moved out just before the family arrived. Writer-director Msangi’s drama is a beautiful character study featuring impressive performances that convey the fragility of families that reunite after decades apart.

Kathia Woods Immigration to America isn’t a subject matter that engulfs only Mexican Americans and Latinos. Farewell Amor shows beautifully how legal immigration to the United States can be a long and expensive process. Ekwa Msangi does a beautiful job of showing what a family endures when they are reunited after 17 years. She also gets the Portuguese correctly spoken in the film seeing that the family is from Angola. This film’s subject matter is grave, but there are numerous funny moments in there, such as veteran actress Joie Lee Nzinghga helping Esther (Zainab Jah) update her style. This film also tackles the importance of religion vs. fate. All the above make Farewell Amor a delightful movie, which in the end shows that legal immigration to the United States is not as cut and dry as the government makes it seem, especially if you are of African descent and escaping a war-torn country.

Liz Whittemore Writer/director Ekwa Msangi tackles culture, faith, and the love of dance. Performances are grounded and refreshing. This intimate, slow-burn multi-narrative, culminates in a jubilant finale. Farewell Amor bridges the generational gap and spotlights communication as the key to any relationship.

Cate MarquisIn Farewell Amor, an Angolan immigrant living in New York is reunited with the wife and daughter he left behind 17 years earlier when they are finally able to immigrate to the U.S. But much has changed during that long wait: the little daughter he left is now a teenager, and he and his wife hardly know each other now. As this family struggles to adjust, writer/director Ekwa Msangi spins out this well-written human drama in three chapters, telling the story through the eyes of each of the family members. Both timely and personal, and featuring fine performances from all three actors, Farewell Amor draws you in with unexpected insights and meaning.