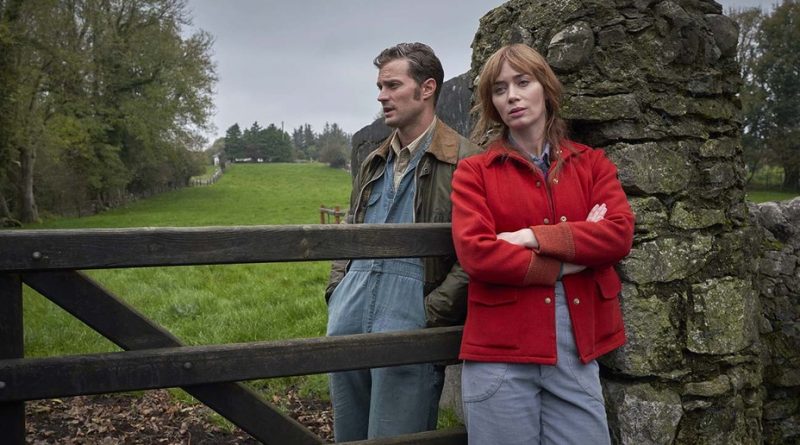 When the trailer for Wild Mountain Thyme first landed, Irish folk grabbed their verbal shalaylees and cried foul over what they condemned as dodgy Emerald Isle accents and corny “Erin Go Bragh” clichés. Having now seen the film myself, those impressions aren’t totally wrong.

That said, it isn’t a half-bad thing to sit back and watch that hunk of manhood known as Jamie Dornan – best known as S&M specialist Christian Grey in the Fifty Shades franchise — act like a twitchy, tongue-tied farm boy next door named Anthony who has been mooning over his farm girl neighbor Rosemary (Emily Blunt) for years without ever openly declaring his feelings for her. She, meanwhile, has a yearning for dancing like the White Swan in the ballet Swan Lake and hides in trees to spy on her beloved.

OK, Dornan was born in Northern Ireland, so he lends a wee bit of legitimacy to the goings-on that were shot among the strikingly verdant and perpetually damp landscapes found in County Mayo. His dad is played by Christopher Walken, whose accent wavers more than a bit. But at least Blunt’s mum is played by Dearbhla Molloy, who is as Irish as they come.

A pseudo rival arrives in the form of Adam, Anthony’s American cousin played by John Hamm as a rich entrepreneur, the type who rents a Rolls-Royce just because he can. He is flirting with the idea of buying the family farm and he also has eyes for Rosemary as well. She takes a one-day trip to New York City to see Swan Lake performed and test her feelings for Adam. As for Anthony, he briefly gets cozy with a less intimidating bar fly named Fiona.

Given that the film is directed and written by John Patrick Shanley, who won an Oscar for his script for the 1987 romantic comedy Moonstruck, surely someone on screen could have taken a cue from that classic and told these two kooky adults who have known since they were kids that they were destined for each other to simply “snap out of it.” Eventually they do, over bottled Guinness and in the midst of a raging rain storm, but it takes an entire film to finally get to that point.

Shanley based the movie on his 2014 Tony-nominated play Outside Mullingar, which starred Debra Messing in her Broadway debut. Without the atmospheric setting, I can’t imagine what the stage production must have been like. Fans of Dornan and Blunt might get some satisfaction in seeing them share the screen. But perhaps some Guinness might make it go down better.