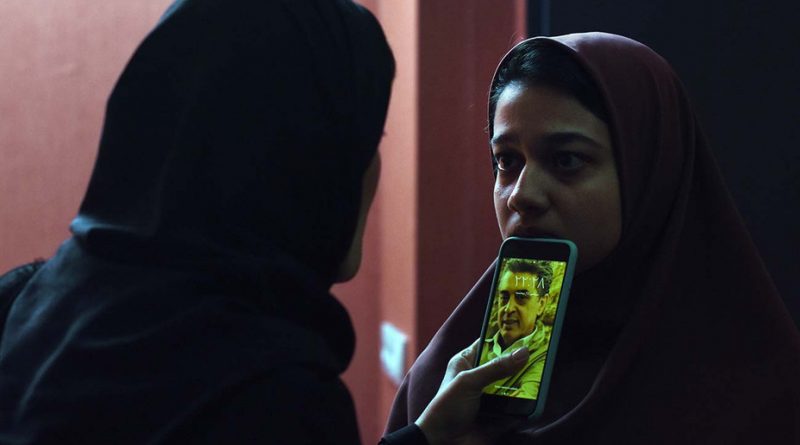 Maryam has been imprisoned for the murder of her much older husband.

Luckily, she has a chance to escape the death penalty by appearing on a reality TV show where she can beg her late husband’s family for forgiveness.

This is the surreal setting for filmmaker Massoud Bakhshi’s feminist drama about contemporary Iranian life — the most surreal element being that such a reality TV show actually exists.

Yalda, A Night For Forgiveness is set in a Tehran TV studio where two women will meet to make a life or death decision. Maryam Komijani (Sadaf Asgari) has been in prison for 15 months for killing her husband, an act she claims was accidental.

Mona Zia (Behnaz Jafari) is the adult daughter of the dead man, a wealthy woman now running her late father’s business. It’s going to be up to her whether Maryam gets to live.

The women appear on The Joy of Forgiveness, a glitzy reality TV show with a slick host (Arman Darvish) and an over-the-top set featuring blush coloured velvet throne chairs and baskets of watermelon and pomegranates.

It happens to be the solstice festival of Yalda, which means birth or rebirth, and the red fruit is traditional for Yalda celebrations.

(Digression: pomegranates are freighted with symbolic meaning, representing both fertility and spiritual aspiration; the fruit is also central to the myth of Persephone and the notion of the indissolubility of marriage.)

Anyway, red fruit, red chairs — it can’t be coincidence that the TV show set is so womb-like.

Maryam’s job is to wax remorseful and beg for her life, but things quickly go off the rails. She’s anxious and distressed about being on the show, despite the reassurances of the producer (Babak Karimi) and the fussing of her own stage mother mom (Fereshteh Sadre Orafaiy).

Maryam tells the truth, an unexpected development. She breaks down and cries while telling the story of her coerced marriage, and the family ties and economic necessity that factored into it. Hers was a “temporary marriage” which is a new name for old polygamy; Maryam wanted a permanent and proper marriage.

The argument that led to her husband’s death was sparked by news that Maryam had committed the ultimate crime: she accidentally got pregnant, which was against the conditions of the marriage; ponder the absurdity of such conditions.

Any child of Maryam’s would also threaten Mona’s inheritance status as an only child. The baby is stillborn, an incalculable loss to Maryam but convenient for everyone else.

While Maryam tells her emotional story, Mona is withdrawn and offers only dismissive comments. The social divide between the women is vast; Mona implies that Maryam is unsophisticated and a gold digger.

Their devastating exchange plays out against the three-ring-circus atmosphere of the reality TV show — where viewers can text who they’re rooting for, and if enough send texts, the show sponsors will pay the blood money required from the killer’s family.

It is a wild, absurd landscape, with pop stars singing and movie stars turning up to read poetry and pick the week’s “best forgiver.”

And there are commercial breaks in the midst of dark drama. It’s a blackly comic backdrop for a story of social, gender and economic inequity.

Writer/director Bakhshi moves the story briefly away from the studio and into the city streets to emphasize how money allows Mona to hold herself above the law (secular or religious) — laws which carefully maintain the patriarchy underpinning everybody’s conscious and unconscious moves.

Whatever passes for forgiveness or compassion here is mostly about money, and when the talk show host says, “There’s divine mercy in forgiveness,” you don’t know whether to laugh or cry.

The disconnect between private life and public performance applies to religion just as surely as it does to reality TV.

Yalda, A Night For Forgiveness underlines all the hypocrisy and financial finagling that goes on under the guise of religion in contemporary society. The setting is Tehran but it could just as easily be Washington.

The real TV show upon which Joy of Forgiveness is based was called Mah-e Asal, (“honeymoon”) and it was held for years during Ramadan. It abruptly went off the air not long ago; in a recent interview, Bakhshi said he believes that was a direct result of the release of his movie.