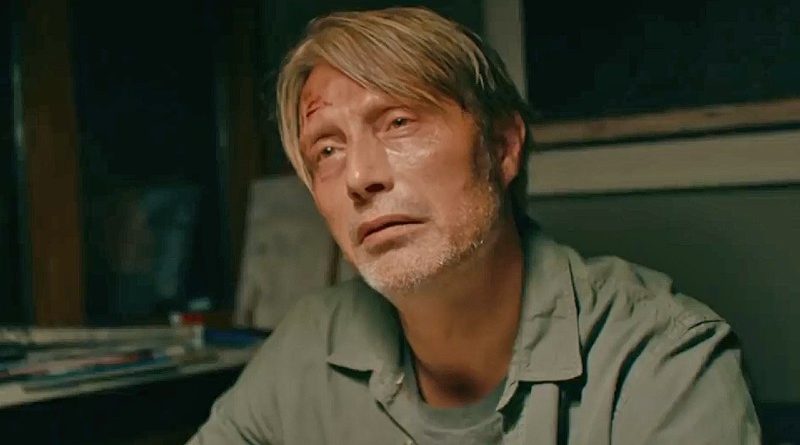 Danish director Thomas Vinterberg’s Another Round is a film at war with itself. On the one hand, it warns against the negative effects and dire professional and personal consequences of daily, increasing alcohol consumption. On the other hand, it celebrates the joyful camaraderie and liberating abandon drinking brings. As alarming, the setup comes with a scientific overlay.

Four male colleagues who teach at the same Copenhagen high school, each wallowing in mid-life angst, decide to test Norwegian psychiatrist Finn Skaderud’s hypothesis that our normal blood alcohol level is biologically too low. He posits that an increase to 0.05% contributes to a better social self: more confident, energetic, and assertive. And so Martin, Tommy, Nikolaj, and Peter begin to add shots of vodka to their water and to partake of other alcoholic drinks. To validate their experiment, they measure their new alcohol levels and record the psychological and physical effects. Teaching, tutoring, coaching, leading a choral group: all their activities exhibit varied results.

Not content with their modest research, they decide to drink, as they say, to ignition, to reach a maximum level. Family life, especially Martin’s, suffers the most, while Tommy’s soccer coaching experiences ups and downs. Equally appalling, overindulgence is echoed in a teenagers’ beer-fueled race around a lake, a student who passes an exam after drinking to relax, and a champagne celebration accompanying graduation. On balance, the end result of the drinking is tragic in one case and clearly destructive in other relationships, though all the women impacted remain undeveloped, secondary characters.

As Martin, Mads Mikkelsen delivers another complex, compelling performance, his face a landscape registering his kaleidoscopic fears, hesitation, and elation. While his three friends let loose with some riotous dancing in several drunken scenes, Martin stands back until one monumental, explosive delight. Knowing that Mikkelsen is a trained gymnast and a professional dancer for a decade, I held my breath waiting for this. Mikkelsen does not disappoint though I could have watched him much longer and without the intrusive editing interrupting his amazing moves. For their roles, his three counterparts (Magnus Millang, Thomas Bo Larsen, and Lars Ranthe) feel entirely authentic and, at times, heartbreaking.

Cinematographer Sturla Brandth Grøvlen’s choices complement the men’s physical composure or lack thereof, that is, as they stagger and lurch, the camera translates their unease to its unhinged movement. At other more sober times, compositions capture the men from a fixed position in medium closeups or medium shots. Over all, given the statistics on alcoholism and the serious costs of alcoholic indulgence, Another Round’s deep dive into gratuitous consumption stands as a warning, though much too soft an indictment of Denmark’s and many other countries’ abuse of alcohol. Denmark’s Academy Award submission for Best International Feature Film, in Danish with English subtitles, Another Round is available on multiple platforms and in select theaters.