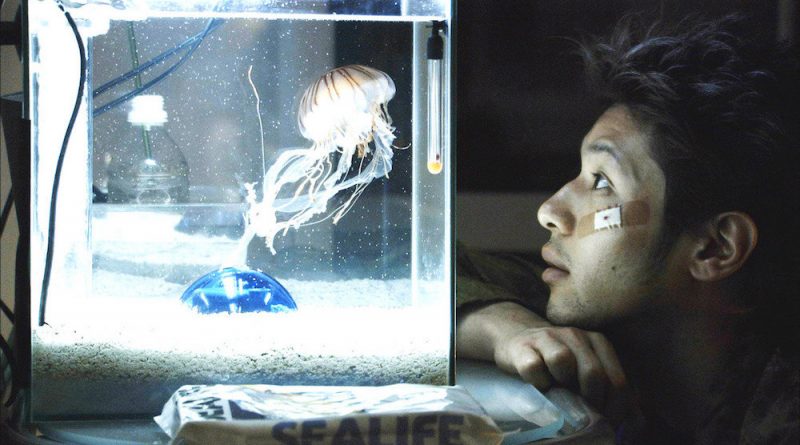 Japanese director Kiyoshi Kurosawa is a sly director, relating simple stories, part reality and part fantasy, with a straightforward approach. And yet he embeds astute social commentary in narrative details, as he does exceptionally well in Bright Future (2003) set in present-day Tokyo. In it, Kurosawa tells a meandering tale that reveals the many reasons for the central character’s aimlessness.

Friends and co-workers Yuji Nimura and Mamoru Arita bond over their fascination with a beautiful, venomous red jellyfish and hatred of their boss Fujiwara. Working at a hand towel (oshibori) factory, they decide to kill Fujiwara, and, without revealing important details here, Mamoru goes to prison for it. Soon, Yuji is taken in by Mamoru’s father, who runs his own electronics salvage business. The jellyfish escapes, multiplies, and, in a beautiful scene, hundreds of iridescent, glowing jellyfish travel the Sumida River toward the ocean.

Events provide the structure on which to expose ideas about this world, most significantly that technology dwarfs people as it does at the laundry and the recycling business. Everything seems to need excessive repair and attention, the symbolic jellyfish included. Families figure into the diverse interaction, and yet Mamoru’s divorced father admits he hasn’t seen his son in five years, Yuji’s sister comes and goes only casually involved. A lawyer seems disinterested in defending an accused man, and news reports on televisions in the background report economic downturns amid concerns. Mamoru’s father and Yuji ride in a car separated by a solid black barrier on screen between them. And a group of seven teenagers, all wearing Che Guevara t-shirts, run riot through an office crowded with computers as the camera translates the frenzy to unfettered, wild movement stopped immediately by the arrival of police.

Meantime the story of Fujiwara’s murder unfolds, though it becomes secondary to implicit critiques, channeled at times through the symbolism of the jellyfish. Canted angles convey this unbalanced world of nihilistic, lost youth as toxic as their pet jellyfish. In Japanese with English subtitles, Bright Future is available through the KimStim website.