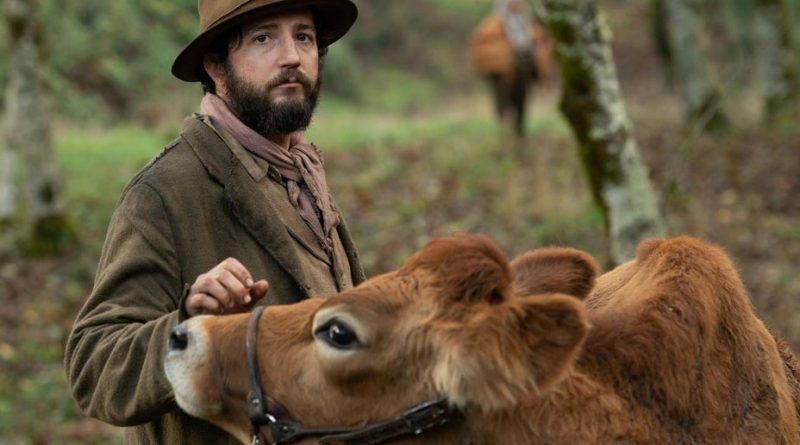 Director/co-writer/editor Kelly Reichardt’s minimalist Western takes a while to get into…first, there’s a quotation from William Blake’s Proverbs of Hell: “The bird a nest, the spider a web, man friendship.”

In the prologue, a contemporary woman (Alia Shawkat) who is walking with her dog near a broad river discovers a pair of human skeletons. Then there’s a flashback…

Back in the 1820s in the Oregon Territory, shy, soft-spoken Otis “Cookie” Figowitz (John Magaro) is gathering wild mushrooms in preparation for making an evening meal for a band of gruff fur trappers when he befriends a naked Chinese immigrant, King-Lu (Orion Lee), on the run from some Russians.

A short time later, a wealthy Englishman (Toby Jones), known as the Chief Factor, receives the area’s first bovine, which arrives on a raft. Seeing the cow and appreciating Cookie’s baking skill in their make-shift kitchen, King-Lu comes up with a plan.

Late at night, they’ll sneak up to the prized cow and fill a pail with milk. Then, in the morning, when local workers/trappers gather at Fort Tillicum, they’ll sell their ‘oily cakes’ (fried biscuits topped with honey & cinnamon) which are an immediate success, spurring them to dream about opening a bakery in San Francisco.

Complications arise when the pompous Chief Factor asks Cookie to concoct a “clarfoutis’ to impress his pretentious friends. (A ‘clarfoutis’ is a French dessert in which layers of fruit – traditionally black cherries – are covered in batter, baked and covered with powdered sugar, often served with cream.)

Based on Jon Raymond’s novel The Half-Life, it’s adapted by Raymond and Reichardt, whose previous films – Wendy and Lucy, Old Joy, Certain Women, Meek’s Cutoff – also bear the indelible stamp of the Pacific Northwest – along with tinges of 19th century Fredric Remington authenticity.

FYI: Originally, the title was Slow Elk, which is how Oregon’s native Chinooks referred to cattle.

On the Granger Gauge of 1 to 10, First Cow is a spare, sublimely subtle 7, a genial tale of genuine friendship.